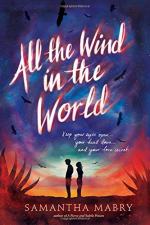 All the Wind in the World Summary & Study Guide

Samantha Mabry
This Study Guide consists of approximately 57 pages of chapter summaries, quotes, character analysis, themes, and more - everything you need to sharpen your knowledge of All the Wind in the World.

All the Wind in the World Summary & Study Guide Description

All the Wind in the World Summary & Study Guide includes comprehensive information and analysis to help you understand the book. This study guide contains the following sections:

This detailed literature summary also contains Quotes and a Free Quiz on All the Wind in the World by Samantha Mabry.

The following version of the book was used to create this study guide: Marbry, Samantha. All the Wind in the World. Algonquin Young Readers, Chapel Hill, North Carolina, 2017. Kindle AZW file.

Sarah Jacqueline Crow and James Holt have traveled across most of the central United States. The area is mostly desert where little grows and less thrives. They have faced terrible hardships and tragedy, including the death of Sarah's younger sister, Lane. Their love is deep and passionate, and Sarah feels certain neither of them will ever waver.

Sarah and James are working on a farm near Truth or Consequences, New Mexico. They spend all day chopping the spiny outer growth of maguey plants so that other workers can harvest the hearts for making liquor. It is grueling work, but they have been saving their money. They have a plan to go east where they plan to have a home of their own, a horse for Sarah, and access to the ocean. Sarah and James have been traveling together for a while by the time they reach New Mexico. They have seen first-hand that some people will take advantage of one person's love for another. Because of that, they keep their love secret. They introduce themselves as cousins. James always finds another love interest to dissuade anyone from speculating about their relationship. One day, a dust storm hits. A foreman on a horse is about to trample an old man and little boy. Sarah intervenes, the horse rears, and the foreman dies. Sarah’s punishment for her role in the accident could be execution. So, she and James run, leaving behind the money they have saved.

They catch a train and meet a man named Leo. Leo reveals that he is going to Real Marvelous. Since there are rumors about supernatural occurrences at the farm, the farm usually has available work. Leo seems to know that Sarah and James are not cousins, but he helps keep their secret. They arrive at the Real Marvelous, owned by Mr. Gonzales. He has two daughters, Bell and Farrah. Farrah is a young woman who has some mysterious ailment. Bell is very young and reminds Sarah of her sister, Lane. Mr. Gonzales learns that Sarah has experience with horses, and he forces her to begin teaching Bell to ride. Bell is a reluctant student and Sarah is a reluctant teacher, but they begin to forge a bond.

Sarah discovers that Farrah is enamored with James, and Sarah comes up with a plan for James to pretend to be interested in Farrah. When he has access to the house, he will steal something of value and they will leave this farm behind, finally headed for the east coast and their dreams. James begins spending time with Farrah. He goes with Farrah and Mr. Gonzales on a short trip where Farrah is apparently cured of her illness. When they return, Farrah and James are married. James says he loves Farrah and tries to make Sarah leave. Beset by anger and grief, Sarah takes Bell into the desert where she plans to let the little girl die, but Sarah cannot leave her. Sarah goes to prison when she returns, and she hears the news that Mr. Gonzales is going to execute her.

The stories about Real Marvelous contain superstition and curses, such as a woman claiming to be a prophet predicts terrible events. When some of the predictions come true, rumors abound that Bell is a witch who caused her mother's death. Sarah becomes convinced the rumors about Bell are true, but she fears for Bell's life, and tells another worker that Farrah is the witch. When bees swarm the farm just as Sarah is about to be executed, James comes to her rescue. The workers, mad with hunger, anger, and fear, kill the supervisors and each other, and destroy the farm. Sarah, James, and Bell escape together and join Leo, who has bought a piece of land and is building a farm of his own. Under assumed names, Sarah, James, and Bell live as husband and wife with their adopted daughter.

More summaries and resources for teaching or studying All the Wind in the World.

All the Wind in the World from BookRags. (c)2021 BookRags, Inc. All rights reserved.