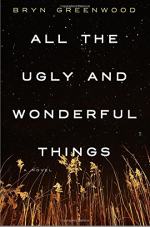 Related Topics
The Reckless Oath We Made

All the Ugly and Wonderful Things Summary & Study Guide

Bryn Greenwood
This Study Guide consists of approximately 49 pages of chapter summaries, quotes, character analysis, themes, and more - everything you need to sharpen your knowledge of All the Ugly and Wonderful Things.

All the Ugly and Wonderful Things Summary & Study Guide Description

All the Ugly and Wonderful Things Summary & Study Guide includes comprehensive information and analysis to help you understand the book. This study guide contains the following sections:

This detailed literature summary also contains Quotes and a Free Quiz on All the Ugly and Wonderful Things by Bryn Greenwood.

The following version of this book was used to create this study guide: Greenwood, Bryn. All the Ugly and Wonderful Things. Thomas Dunne Books, August 9, 2016. PDF version on eBook.

Bryn Greenwood pieces this entire piece together by tethering every character’s personal, first person account of events. As one event comes to an end, a different character takes over the conclusion and moves forward. This provides the feeling that the story is being told by an omniscient narrator, although every section is from a first person limited point of view. The entire story is told in present tense with few flashbacks. All the Ugly and Wonderful things tells the story of an abused girl named Wavonna “Wavy” Quinn. Wavy is described as being born in the backseat of a car because her mother, Val, did not care enough to even ensure they had a working car. Val is a drug addict who married Liam, a meth manufacturer and dealer. The novel spans from Wavy’s life at age five to her life at roughly age 22.

The novel begins with Wavy’s cousin, Amy, describing her experience living with Wavy. She has been put into state custody because both of her parent’s have been arrested. Wavy rarely speaks and is afraid to eat in front of people. As the novel progresses, each of the chapters switch to a different character’s perspective, which is why we learn about Wavy’s mother’s tendency to threaten her daughter with the idea of germs. Val has trained Wavy to believe that everything is dirty, from food to other people to Wavy herself. As a result, Wavy is afraid to eat in front of people and she refuses to be touched or to touch anyone else.

Eventually, Wavy settles back in with her mother and father in a farmhouse just outside of a town called Powell. Shortly after arriving there, Wavy develops a fascination with the night sky and frequently sneaks off in the middle of the night to look at constellations. It is on one of these nights when she hears the strong engine sound of a motorcycle speeding along the road to her farmhouse. She runs to see the bike, but frightens the driver enough to cause a crash. A man by the name of Jesse Joe Barfoot Jr. (Kellen) crashes and needs Wavy’s help getting help. The eight-year-old Wavy calls her father for help, which is when we discover that Kellen is one of Liam’s drug pushers.

Despite the nearly 15 years between them, Kellen and Wavy are instantly drawn to one another. Kellen gives her rides to school and cleans up the farmhouse while she is studying. Wavy makes him elaborate dinners and drags him off into the meadow where she teaches him about constellations. Their friendship quickly develops into romance, but Kellen is not sure if what he is doing is wrong. Almost everyone else thinks that he is taking advantage of a young girl, but in his heart Kellen knows that they truly and genuinely love each other. Wavy is happy to finally have someone who is hers, a person to take care of her and that she can take care of in return. They’re outings are sweet and delicate with the cuddling and sense of belonging each of them craves.

Kellen grew up as Jesse Joe Barfoot Jr., a member of the local reservation with a well-known abusive alcoholic father. His childhood was rough and he has never developed a sense of belonging anywhere or to anyone. Similarly, Wavy is growing up in near a meth lab with a mother who is either sleeping or emotionally abusing her and a father who despises her. Kellen and Wavy need each other’s non-judgmental love, and they do not care what others think about their age difference. In Wavy’s mind, their relationship is natural, but Kellen struggles with how young she is. He wants nothing more than to take care of her and to protect her from any further abuse. He constantly worries that he is taking advantage of her, which makes him try to avoid any sexual contact for as long as he can.

The majority of the novel centers around how each character interprets their relationship. Wavy’s mother does not seem to care one way or the other because she is far too busy sleeping her depression away. Brenda, Wavy’s aunt, on the other hand believes that Kellen is abusive for being with such a young girl. The two have to fight and claw their way through acceptance and decide to get engaged around the time that Wavy is 13.

The story takes a sharp turn on Wavy’s fourteenth birthday in 1973. In the span of one day, Wavy’s parents, Val and Liam, are murdered; Wavy has her first sexual encounter with Kellen, and her relatives walk in on her having an intimate moment with Kellen in his auto shop. This is Wavy’s crisis. This is the time in her life when her mother is taken away and she must leave Powell without Kellen. He is imprisoned for 10 years for having sex with a minor under the age of 16. During this time Wavy is forced to move in with an overbearing Brenda who takes control of all the financial assets Kellen gives her while he is in jail. Wavy not only loses her fiancé, she also loses her brother, who is taken away by, what turns out to be, his biological father, Sean. Wavy is sent spiraling into depression. Everything important in her life is taken away from her and she is forced to come to terms with feeling alone in a cold world. She tries to stay in contact with her brother, Donal, and Kellen, but all of her letters are rejected.

Wavy manages to graduate high school and make her way into university. She still refuses to talk on most occasions and does not allow people to touch her. She begins to make friends while studying Astrophysics, a way to get closer to the stars, when she learns that Kellen has been released on parole. He has had two hearings, both of which Brenda attended to request that he remain in prison for raping her niece. Wavy is never told about these parole hearings, so she never attends them. Her absence there causes Kellen to despair and wonder if the now college- aged Wavy considers him to be a rapist who took advantage of her at a young age. Kellen leaves prison and tries to set up a life as a registered sex offender. Wavy fights to find him and the two of them reunite in a passionate sex scene. But Kellen rejects her, reminding her that he is violating the terms of his parole by seeing her. The court demands that he never speak to or interact with Wavy in any way. She returns to her university where she researches ways to change the terms of his parole, and she fights long and hard until the judge allows her and Kellen to be together. The story ends with Wavy surrounded by family members at a Christmas dinner. She is married to Kellen and lives with her brother, Donal. Even Brenda becomes a believer in the connection between the two long-term lovers.

More summaries and resources for teaching or studying All the Ugly and Wonderful Things.

All the Ugly and Wonderful Things from BookRags. (c)2022 BookRags, Inc. All rights reserved.