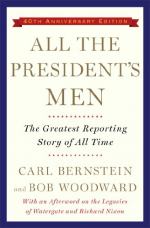 All the President's Men Summary & Study Guide includes comprehensive information and analysis to help you understand the book. This study guide contains the following sections:

This detailed literature summary also contains Topics for Discussion and a Free Quiz on All the President's Men by Bob Woodward and Carl Bernstein.

All The President's Men by Bob Woodward and Carl Bernstein tells the story behind the Watergate scandal. It all started with a burglary at the Democratic headquarters, but proved to be something much more complex. This story tells how two reporters worked with sources to uncover deceit in the highest levels of government.

On June 17, 1972, Woodward was asked to cover a story for his job at the "Washington Post." There had been a burglary at the Watergate hotel. When he arrived at the newsroom, he discovered that this wasn't an ordinary burglary, and he wasn't the only one reporting on it. The burglars had broken into the headquarters of the Democratic national committee in the Watergate office-apartment-hotel-complex. Bernstein had the same assignment. The two men had no appreciation for each other.

At the trial, Woodward realized that there might be more to the story. Bernstein did some research of his own while he was taking a few days off of work. He interviewed others and observed that the White House wasn't the well-oiled machine it came across as being. Some viewed the President's men with scorn.

Powerful men resigned from their jobs, and Bernstein and Woodward learned about a secret fund used to undermine Democratic political campaigns using illegal tactics such as threats, phone-tapping and spying. They struggled to find solid evidence to write about since their interviewees were terrified to speak.

Woodward had an inside man who was a key informant. They arranged super-secret meetings wherein the informant, nicknamed Deep Throat, would confirm or deny evidence the reporters unearthed. He would offer clues to areas they should research further, but he would never offer names. He also wouldn't let them quote him.

As evidence grew, the reporters learned that over 50 individuals were hired to infiltrate the Democratic campaign and wreak havoc. The salaries were paid using a secret bank account that had been created using campaign donations for the Republican party. A group of the President's men authorized the withdrawals from the account.

Each time the reporters came out with a story, the White House said the stories were filled with false information, but wouldn't point out inaccuracies. The White House attacked the "Post" repetitively. There was one story in which there was a misunderstanding, and the reporters got a fact wrong. The White House jumped on the situation, trying to show that the "Post" only offered shoddy journalism. It set the investigation back for months.

Other newspapers began to pick up the story, finding more evidence. As truths came out, the "Post" was vindicated. More men were arrested, and it became evident that powerful people were part of the conspiracy they denied. Still, there were loose ends to figure out. Some men were taking the blame for situations in which they were really innocent. Some did this to protect their families, others did it out of dedication to the President and his men.

As more evidence began to unfold, chilling evidence came to light. The reporters just had to prove it. The evidence showed that the President himself was part of the conspiracy.

All the President's Men from BookRags. (c)2022 BookRags, Inc. All rights reserved.