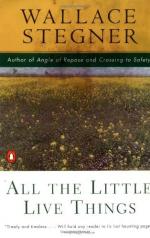 Plot Summary
+Chapters Summary and Analysis
How Do I Know What I Think Till I See What I Say? And Chapter 1
Chapter 2
Chapter 3
Chapter 4
Chapter 5
Chapter 6
Chapter 7 and Epilogue
Characters
Objects/Places
Themes
Style
Quotes
Topics for Discussion
Order our All the Little Live Things Study Guide

Wallace Stegner
This Study Guide consists of approximately 30 pages of chapter summaries, quotes, character analysis, themes, and more - everything you need to sharpen your knowledge of All the Little Live Things.

All the Little Live Things Summary & Study Guide includes comprehensive information and analysis to help you understand the book. This study guide contains the following sections:

This detailed literature summary also contains Topics for Discussion on All the Little Live Things by Wallace Stegner.

All the Little Live Things is a novel by award winning novelist Wallace Stegner. In this novel, Wallace Stegner explores the animosity between the younger and older generations in the sixties. Joe Allston is a retired book editor who recently built a house in a rural California community in order to live out his retirement. Joe becomes involved with two members of the younger generation, one a free-spirited student who takes advantage of Joe's kindness while living on his property, and the other a young mother who gives her life in a struggle with cancer to bring her unborn baby into the world. Joe will find himself at times at odds with both these characters, but will also learn from them in a way that will leave him irrevocably changed. All the Little Live Things begins as a novel of generation against generation, but quickly becomes a novel about individual experiences and personal growth.

Joe and his wife, Ruth, are walking on their property when they discover a young student sitting astride a motorcycle, contemplating a section of their land. The young man, whom Joe instantly dislikes, requests permission to camp on this section of land for an undefined amount of time. Although Joe does not agree with Jim Peck's philosophical beliefs, he grants permission with a list of rules at the behest of his wife. Immediately, Jim builds himself a platform in the trees for his tent and a bridge to access the area more readily. Jim also begins working on a treehouse. Joe finds these renovations contrary to Jim's supposed dislike of all things modern, but keeps his mouth shut to all but Ruth.

A young couple moves into the empty cottage next door. Joe is immediately drawn to the young mother, Marian, who readily argues with him over the idea that nature should be left alone to act as it was intended, including the gopher that is eating all of Joe's plants. They argue in a friendly fashion for quite a while until Ruth finally convinces Joe to change the subject. Joe then tells the Catlins about their neighbors, specifically the Welds. The Welds once owned the land where all the neighbors have their homes, but sold it over time due to an unwillingness to work hard enough to keep up tax payments on the land. To illustrate his story, Joe talks about Weld's unwillingness to change his fences after selling the land the Allstons now own, allowing the horses they boarded to room free through the Allstons' home construction.

Over time, the Allstons and Catlins become good friends, often going on explorations through the city together and sharing late afternoon meals. The Catlins meet Jim Peck, and to Joe's surprise, become friends. One afternoon Debby, the Catlins' six-year-old daughter, convinces Jim to give a tour of his treehouse. Everyone but Joe goes across the dangerous bridge and marvels at the construction. Julie LoPresti, a neighbor who happens to be riding by on her horse, joins the exploration. As Joe watches from across the way, he notices a bright light in the treehouse. The following afternoon while Jim is out, Joe discovers that he has tapped into his electricity and water well, providing for himself more of the modern conveniences he supposedly shuns, without permission. Also without permission, Jim has built a shed by the road that Joe finds unsightly and annoying.

One afternoon Joe and Marian have a discussion about Jim during which Joe voices many of his displeasures regarding Jim's lack of responsibility and respect for others. Afterward, Joe writes a letter to Marian that explains his relationship with his own son, a wanderer much like Jim, who drowned in a surfing accident. Marian has accused Joe of disliking Jim based on his own relationship with his son, and in this letter, which Marian will never see, Joe admits that perhaps his relationship with Curtis does have something to do with his dislike of Jim, but not all.

During a Fourth of July party at the home of the LoPrestis, Joe becomes drunk and says some unfortunately things Fran LoPresti overhears about a sculpture she create. Afterward, Joe walks in on an argument between Fran and Julie having to do with Julie's disrespect for her parents and relationship with Peck. Afterward, Joe takes Marian home. Marian tells both Joe and Ruth that the cancer she fought before she became pregnant has returned. Although Marian tells them that having radiation treatments will not stop the spread of the disease, Joe becomes enraged when he learns she will not have the treatments in order to protect her growing fetus.

After leaving Marian's home that night, Joe focuses his rage on Jim Peck and his friends, who are at that moment having a loud party at Jim's treehouse. Joe goes down and tells them to be quiet and is annoyed at the lack of respect these people show him. Joe tells Jim he has a week to get off his property. A few days later, Jim comes to ask Joe if he was serious about his having to leave. Joe says he is and Jim becomes angry since he has just gotten funding to begin a school of free thinking on Joe's property. However, Jim moves his personal belongings out before his week is over.

Joe and Ruth help Marian as much as they can during her illness, heartbroken to watch her quickly decline. Joe pushes John many times to force Marian to have treatment, but John insists on letting Marian make her own choices about her life. When Marian begins pushing her daughter, Debby, away, Joe asks her why. Marian insists her death will be easier on the child if she is not so reliant on her mother. Joe disagrees and is convinced Marian is going against her own beliefs, but neither Marian nor John are willing to change the situation.

Eventually Marian's health reaches a critical stage and she is forced to enter the hospital for pain management. On the way to the hospital, Joe finds Jim Peck, Julie LoPresti, David Weld, and another young man blocking the road. Joe honks his horn. Jim loses control of his idling motorcycle, spooking Julie's horse. Julie's horse falls through missing slates on the bridge, further blocking the way. John Catlin is forced to kill the horse in order to get it out of the way. Joe is grieved that this horrific event is the last thing Marian sees of nature.

Marian dies and is buried, along with her infant who did not survive birth. John and Debby move away and the area becomes quiet once more, except for Weld's planned housing development. The LoPrestis no longer associate with the Allstons, but Joe sees them from time to time and notices that Julie's unfortunate pregnancy has brought mother and daughter together once again. Joe reflects on all that has happened and believes that it has made him a better man.

More summaries and resources for teaching or studying All the Little Live Things.

All the Little Live Things from BookRags. (c)2022 BookRags, Inc. All rights reserved.