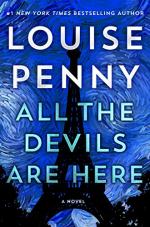 All the Devils Are Here Characters

Louise Penny
This Study Guide consists of approximately 77 pages of chapter summaries, quotes, character analysis, themes, and more - everything you need to sharpen your knowledge of All the Devils Are Here.

Stephen Horowitz is Armand’s 93-year-old godfather. He is a ruthless businessman who enjoys finding and calling out corruption. Plessner contacted Stephen concerning his suspicion that the neodymium GHS was using was causing accidents.

Stephen’s character is called into question by Roquebrune and her followers as they try to discredit his claim that there is a fatal problem with the neodymium that GHS has been using in some of its products. They find information in the archives about Stephen’s service with the Resistance during World War II that suggests Stephen might have been working as a collaborator. Among the documents is a picture of Stephen with Himmler in the Lutetia.

Stephen’s character, however, speaks for itself. Stephen continued to fight against the wrongdoing and deaths for which he believed GHS was responsible even after Roquebrune threatened to destroy his reputation. Stephen liquidates all of...

More summaries and resources for teaching or studying All the Devils Are Here.

All the Devils Are Here from BookRags. (c)2022 BookRags, Inc. All rights reserved.