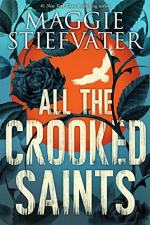 Stiefvater, Maggie
This Study Guide consists of approximately 71 pages of chapter summaries, quotes, character analysis, themes, and more - everything you need to sharpen your knowledge of All the Crooked Saints.

All the Crooked Saints Summary & Study Guide includes comprehensive information and analysis to help you understand the book. This study guide contains the following sections:

This detailed literature summary also contains Quotes and a Free Quiz on All the Crooked Saints by Stiefvater, Maggie.

The following version of this book was used to create this study guide: Stiefvater, Maggie. All the Crooked Saints. Scholastic Press. October 10, 2017.

For several generations, the Soria family has been able to help people receive miracles. They provide miracles to the pilgrims who seek them, looking for ways to make their lives better. The Sorias started out in Mexico. They lived happily and performed miracles for anyone seeking them. However, their reputation angered both the government and the Catholic Church. When the Mexico’s revolution began, the government threatened the Sorias, a family that they viewed as heretics. The family asked the church for protection but the church turned its back on them, and the Soria family relocated to a remote desert village in Colorado. They call their new home Bicho Raro, or strange animal, and they continue to perform miracles for pilgrims seeking help.

Bicho Raro is in the middle of nowhere. It is surrounded by barren desert and the village itself is made up of many, small shanties built by Soria relatives over the years. The town consists of several small homes along with a large and ornate Shrine, which is decorated with a large statue of the Virgin Mary surrounded by owls. Although all of the Sorias can provide miracles, each generation selects one member of the family to be the Saint of Bicho Raro. The Saint delivers the miracles to pilgrims in their memorable Shrine. The process of receiving a miracle is not very simple, however. Pilgrims visit Bicho Raro because they recognize a darkness inside of them. They want to rid themselves of this fault that lessens their happiness and comfort in life. In total, it is a long and difficult twostep process to receive a miracle. First, a pilgrim must visit the Saint in the Shrine. The Saint gives the pilgrim his or her first miracle. However, the pilgrim must earn their second and final miracle. They must bear the shame of their darkness on the outside for all to see. They are then responsible for self-reflection and a change before the mutation goes away and they receive their second miracle, which results in the pilgrim earning his or her happiness back. Many pilgrims do not know of the lengthy and taxing process involved and many mope about Bicho Raro with mutations or deformities for much longer than they would like.

The pilgrims are not the only set of characters that must abide by rules in Bicho Raro. There are teo very important rules to living as a part of the Soria family. The first is that you can never interfere with a pilgrim’s journey for their second miracle. All pilgrims must fight their darkness on their own or else the Soria that interferes will get their darkness thrust upon them. The second is that, if you must fall in love, you must do so with someone who is not in Bicho Raro. These rules are based on family folklore and legend, and almost all believe these rules to be right and true. There are many legends in the Soria family, but there is one story no adult Soria ever talks about. Three Sorias died from their darkness being placed upon them after interfering with a pilgrim’s miracle in 1944. The Saint of Bicho Raro was Benjamin at this time, and he was married to a woman named Loyola. World War II brought on a prisoner of war camp near Bicho Raro, and a German POW limped into the village carrying a baby and crying for help. Benjamin decided to give both the baby and the soldier their first miracle. However, the baby was too young to ask for the miracle and Benjamin’s darkness was cast upon him immediately as punishment for interfering with the baby. He immediately began turning to wood before all of his family. His wife, nine months pregnant at the time, told Benjamin that she would love him no matter what. This provided comfort for Benjamin and was deemed Loyola’s interference in a miracle. She, too, started turning to wood. In order to save the baby inside of her, Jose Soria hacked Loyola’s wooden body apart while he also turned to wood. He saved the baby, but every surviving Soria carries that tragic day in their hearts. They allow that day to change them and their relationships with each other, opting for silence rather than communication.

The majority of the novel takes place much later, in 1962. The Sorias still live in Bicho Raro and they still perform miracles only the current Saint of Bicho Raro is the baby that was taken out is his mother’s wooden body. Daniel Soria is a reformed bad boy who found religion. He is happy serving as the Saint and is even happier knowing that his position helps prevent his unwilling cousin from taking the job. Daniel is extremely close with two of his cousins: Beatriz and Joaquin. The three are close in age and spend the majority of their time together. Beatriz has a very logical and curious mind. She loves dissecting both things and situations. In fact, she enjoyed putting together a broken-down box truck and then converting it into a mobile radio station for her charismatic and fame-driven cousin, Joaquin. The two of them drive to the middle of the desert and put on an illegal radio show each night. Daniel comes with them whenever he is willing to take a break from his studies.

On a rare night that Daniel joins them, he questions Beatriz about the Soria rules and consequences because he knows she has an inquisitive mind about things such as family folklore. Beatriz recognizes that something is wrong with Daniel but she brushes it off as nothing. Their philosophical conversation is interrupted when they spot a car bolting across the desert, heading straight for their village. They know it is a pilgrim looking for a miracle, and they rush back to Bicho Raro so Daniel can perform the first miracle. The car is carrying two very different men. One is seeking a miracle but does not know what the Sorias can or will provide. The other, is a recent high school graduate heading to Bicho Raro to exchange his labor for an old truck his aunt promised he could have. They are driving together because an owl caused Pete Wyatt to swerve into Tony DiRisio’s car. The two were heading in the same direction and decided to drive together after the fender bender. Tony is a famous radio DJ who is tired of fame. Pete is an overly polite and slightly meek young man. The two do not get along very well.

They arrive in Bicho Raro to find what looks to be an abandoned town. They see small houses but no one is home—or at least no one is coming out to help them. Tony steps out of the vehicle only to be attacked by a pack of violent dogs. He is saved when another car drives up and Judith Soria, a member of the family who got married and left Bicho Raro for Colorado Springs, takes Tony to the Shrine. Daniel is there and gives Tony his first miracle, which results in Tony being turned into a huge, 20-foot tall structure of a man seen by everyone for miles. Pete sleeps in the car out of fear of the dogs and wakes in the morning to find he is still all alone in the village. He knows he is there for work, so he finds work to do and begins without asking. Antonia Soria, Beatriz’s mother, recognizes that Pete is not a pilgrim and feels comfortable speaking to him. She sets him up in a room with a priest whose first miracle gave him a wolf’s head and provides him with a list of tasks to complete. Pete begins work right away and almost never takes a break or a day off.

Shortly after Pete’s arrival, Daniel runs away from Bicho Raro. He leaves a note for Beatriz and begs her not to allow anyone to come after him. He has evacuated Bicho Raro because he interfered with a pilgrim’s journey and now his darkness is upon him. He does not want anyone else to get hurt because of his mistake. This throws both cousins into a state of panic, and they try to come up with any ideas that might rescue their beloved Daniel. His goodbye note reveals that he has fallen in love with a pilgrim in Bicho Raro and has sacrificed himself in an effort to help her get her second miracle. Her name is Marisita Lopez and her first miracle resulted in her wearing the same wedding dress everyday. The dress is covered in butterflies and there is a constant rainstorm over her that follows her even while sleeping or cooking. Beatriz and Joaquin go out into the desert at night, hoping to give provisions to Daniel. They come across Marisita doing the same. Beatriz’s first reaction is to experiment with Marisita. Her whole life, Beatriz has been told never to speak to pilgrims, but she, herself, has never tested it and doubts the validity of the warning. They interview Marisita on the radio show, and Daniel hears Marisita admit that she is in love with Daniel also. Nothing bad happens to anyone involved with the show.

The show’s success inspires Beatriz to use the radio as a safe means of helping pilgrims find their second miracle. Recently, the Sorias have noticed that it is nearly impossible for pilgrims to leave Bicho Raro, and their presence in the village has overtaken every bed in the village. She wants to help people and she wants to reclaim her hometown. She knows the adults will disapprove, so Joaquin and Beatriz go behind their backs. The present a few radio shows designed specifically to help specific pilgrims in need. The adults in the village overhear the radio show and are concerned for Joaquin and Beatriz. One of the shows helps release Marisita from her rainstorm and butterflies. Her first reaction is to run and find Daniel. She does, but she is too late. He is dead when she arrives to him. Beatriz notices strange owls hovering over the desert and knows there is something wrong with Daniel. She runs to him and finds his lifeless body being held by a mourning Marisita. Luckily, Beatriz uses her logical brain to examine the situation. She finds that Daniel’s eyes, ears, and breath have been stolen by an owl flying overhead. She battles the owl, but her darkness comes upon her because she is interfering with Daniel’s journey. Pete arrives to save Beatriz, and she is able to overcome her darkness by finally admitting that she is in love with him and wants to be with him. She allows her logic-driven mind to be emotional, and that’s all it took to save Daniel, Marisita, and herself.

More summaries and resources for teaching or studying All the Crooked Saints.

All the Crooked Saints from BookRags. (c)2021 BookRags, Inc. All rights reserved.