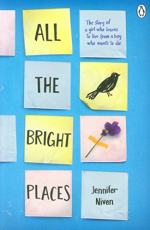 Related Topics
Holding Up the Universe

Jennifer Niven
This Study Guide consists of approximately 76 pages of chapter summaries, quotes, character analysis, themes, and more - everything you need to sharpen your knowledge of All the Bright Places.

All the Bright Places Summary & Study Guide includes comprehensive information and analysis to help you understand the book. This study guide contains the following sections:

This detailed literature summary also contains Quotes and a Free Quiz on All the Bright Places by Jennifer Niven.

Violet Markey and Theodore Finch meet on the ledge of the bell tower of their school, both contemplating suicide, in the novel “All the Bright Places” by Jennifer Niven. Finch, who has long been labeled a freak by his classmates, recognizes Violet’s pain as she tries to deal with the loss of her sister in a car accident. Finch, meanwhile, struggles against a mental illness where he is one moment on top of the world and the next in a depression so deep he can’t even leave his house. Themes of dealing with death and loss, the stigma of mental illness, bullying and the power of love are all addressed through the course of the novel in which these two teens try to help one another through problems bigger than they are.

It is on the anniversary of her sister’s birthday that Violet finds herself balanced on the ledge of the bell tower at her high school. Her sister, Eleanor, had been killed in a car wreck just nine months prior. Finch, who had believed he was in the bell tower alone, talks Violet off the ledge and back into the building. The students watching believe it was Violet who saved Finch instead of vice versa. Neither Finch nor Violet tells them any differently. Later in the day, when Finch notices Violet’s embarrassment when she drops her books and draws attention to herself, he makes a ruckus to draw the attention away from her. He later asks her, in class, to work as his partner on a Geography project. That evening Finch reaches out to Violet through Facebook. He sends her a quote by author Virginia Woolf and Violet responds by sending him a quote in return. The two start a tentative friendship and Violet agrees to work as Finch’s partner.

As Finch uses his humor and patient love to help Violet overcome her grief, he faces a misery of his own. Finch suffers with an undiagnosed mental illness that a school counselor identifies near the end of the novel as bipolar disorder. Finch alternates between being full of energy with an active mind; to sinking into a darkness and depression so deep he cannot remember what took place during those times. He describes himself as being Asleep through these dark times and dreads another episode. Violet is a virtue in his life that helps him to stay Awake.

When Violet learns Finch tried to overdose, and has attended a suicide support group, she becomes worried about him especially because his behavior has become more and more unusual. She confronts him about his illness, hoping to help him but instead sends him on the run. Violet tries to reach out to him through his friends and family but none of them seem really concerned. They pass his behavior off as just the way he is and show little concern until they begin getting goodbye emails and texts from him. It is Violet who finds Finch’s car and clothes beside the Blue Hole, a place they visited during their Geography project. It is assumed Finch intentionally drowned himself.

After his funeral, Violet decides to visit the remaining places they’d marked to see for their project. At each site, she discovers that Finch had been there as well before his death, leaving things behind to show his progress. The final site on their map is a location with which Violet is not familiar. She searches the place out and discovers a tiny chapel built to memorialize people killed in automobile accidents. In a Bible at the front of the chapel, Finch has left the sheet music and lyrics for a song he has written about her. The song lyrics speak of Finch’s love for her and the difference she made in his life even though she wasn’t able to save him.

More summaries and resources for teaching or studying All the Bright Places.

All the Bright Places from BookRags. (c)2022 BookRags, Inc. All rights reserved.