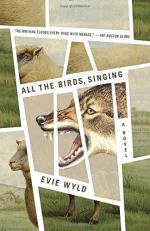 Evie Wyld
This Study Guide consists of approximately 42 pages of chapter summaries, quotes, character analysis, themes, and more - everything you need to sharpen your knowledge of All the Birds, Singing.

All the Birds, Singing Summary & Study Guide includes comprehensive information and analysis to help you understand the book. This study guide contains the following sections:

This detailed literature summary also contains Quotes and a Free Quiz on All the Birds, Singing by Evie Wyld.

In current-day England, a sheep farmer named Jake began to find several of her sheep murdered. The former owner of the farm, Don, suggested it was foxes, but Jake originally believed it to be local teenagers, and then began to suspect a man she saw loitering around her property and who she eventually found sleeping in her barn. Jake begrudgingly allowed the stranger, Lloyd, to stay and help on her land, but only because she continued to hear strange noises around her property and find more dead sheep. She learned Don's son, Samson, had a history of mental illness and of attempting to burn down the house, though she no longer believed it to be a human. Jake began to see what she believed to be a large animal on her property, though she remained uncertain of what was real and what was imagined, since she was paranoid about her past catching up to her.

Meanwhile, there are various flashbacks to Jake's past, which unwind backward as the story progresses. Back at her hometown in Australia, Jake is in love with a boy at her school named Denver, but discovers he loves another girl instead. Trying to play it cool, Jake begins lighting and dropping matches and inadvertently sets fire to her hometown, killing some people and destroying homes and businesses. Jake is run out of town and begins to work as a prostitute, moving from place to place. She befriends another prostitute named Karen, who daydreams about moving to England one day.

Jake eventually moves in with one of her customers, a man named Otto, whom Jake initially believes is kind. However, as she spends more time with him, Otto becomes possessive and domineering, and Jake begins to believe that he may have killed his ex-wife. She manages to escape and starts a new life as part of a sheep shearing crew, where she begins a relationship with one of the other workers, Greg. However, Greg's friend Clare is suspicious of Jake and digs up dirt about her past. He tries to blackmail her into giving him sexual favors, but Jake knocks him out and takes off, moving to England.

In modern-day England, Jake continued to be paranoid about the noises she was hearing and the things she was seeing, especially since Lloyd never seemed to hear or see them, too. However, as they drove into town, Lloyd spotted the same animal as Jake, suggesting that she wasn't out of her mind and that something truly had been killing the sheep, though it is never explicitly named.

More summaries and resources for teaching or studying All the Birds, Singing.

All the Birds, Singing from BookRags. (c)2022 BookRags, Inc. All rights reserved.