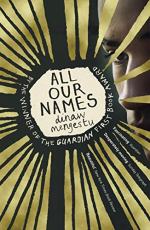 Related Topics
How to Read the Air

All Our Names Summary & Study Guide

Dinaw Mengestu
This Study Guide consists of approximately 94 pages of chapter summaries, quotes, character analysis, themes, and more - everything you need to sharpen your knowledge of All Our Names.

All Our Names Summary & Study Guide includes comprehensive information and analysis to help you understand the book. This study guide contains the following sections:

This detailed literature summary also contains Quotes and a Free Quiz on All Our Names by Dinaw Mengestu.

All Our Names is the story of a friendship between two young men united during a time of protest and of the woman whose life is changed after the two men are separated. A young man from a small African village gives up his name and goes to the Ugandan capital of Kampala in hopes of eventually studying literature. He befriends a mysterious yet charismatic man named Isaac and the pair become virtually inseparable. Isaac hopes to be a politician as the government is in an unsteady position at the moment. As time goes on, revolution breaks out with Isaac slowly joining the cause. Eventually, Isaac and the narrator are fully involved in the revolution and when tragedy strikes, the two men are separated, causing Isaac to do one final act out of loyalty and devotion to his friend. Some time later, in a small Midwestern town, a social worker named Helen is assigned to aid an African foreign exchange student named Isaac as he settles in to life in America. Shortly after his arrival the pair form a romantic relationship that is considered taboo in a community still plagued by racism. As Helen develops new ideas about life, a revolution of her own takes place as she learns to finally be free of the tedious life she once had. As Helen and the narrator's stories intertwine, this historical fiction novel is one of devotion, change, and the true meaning of identity.

A young man from a remote village is inspired by an article in an old newspaper to become a writer. Feeling that he must go to the university in the capital city of Kampala, the narrator sheds his name and begins a new life in the city. During this time, the city is experiencing volatile conditions as one revolution has ended but due to the corrupt new government, a new revolution is on the forefront. While posing as a student at the university, the narrator meets another man posing as a student and a friendship begins. This charismatic, yet mysterious man, is only named Isaac and his goal is to study politics as he dreams of aiding his country in the times to come. Over time, Isaac begins to be more active in the oncoming protests. He begins a "paper revolution", writings of crimes against the country, that he places all over the university. This campaign is successful, but when he goes to celebrate this small victory at a popular cafe, he is taunted by the rich students there and a fight breaks out where Isaac is badly beaten. This does not deter Isaac, instead it propels him further by giving him visual marks to show that he is involved in the revolution.

As the "paper revolution" dies down, Isaac holds gatherings where people confess their "crimes". By this time it has become more difficult to gather in crowds. Isaac's gathering is broken up by guards who beat Isaac and others, but the narrator flees before he is inured. The next time the narrator sees Isaac is during a peaceful protest at the university. The students gather all night but tear gas is thrown into the group first thing in the morning and students are forcefully arrested. Isaac and the narrator escape to an abandoned classroom where Isaac is now living. The pair joke about making bombs throughout the day and the narrator is able to get back to his own home shortly after nightfall. After hiding out for several days, the narrator takes a walk and buys a government newspaper. As he is strolling down the street, unknown men assault him, leaving him a bloody mess in the street. When the narrator wakes up in the hospital, Isaac is there to give him a black notebook and to share his joy that they now have even more in common.

After the narrator leaves the hospital, he is taken to the home of a rebel named Joseph. He is the owner of the Cafe Flamingo and he has nurtured Isaac in the days since. Joseph secretly offers the narrator a way to leave the area before the battles begin, but the narrator chooses to stay. The narrator is sent on a mission to deliver arms to a house in Kampala where fighting is set to begin. After he returns to Joseph's house a fight breaks out between Isaac and the narrator over Isaac's relationship with Jospeh, but it is quickly over and they move on to Joseph's hometown to liberate it. After the village is liberated, Isaac has an elderly man take Isaac to another village to keep him safe from the fighting. This does not work as the narrator witnesses the villagers murder refugees seeking shelter. The narrator returns to Joseph's village and finds Isaac who tells him that soon things will be over. later in the evening, Joseph is brought out of his home by soldiers and executed. Isaac then informs the narrator that it is time for him to leave. Isaac gives the narrator a passport with no picture, a student visa, money, and a notebook. He informs the narrator that he is to take on his identity and, as Isaac Mabira, he is to leave the country and study in America. The narrator opens the notebook and notices that Isaac has written down all of the names that he gave to the narrator previously but they are all scratched out except for Isaac's name at the bottom. The pair embrace and say goodbye, knowing that they will probably never see each other again.

Helen is a middle-aged, white, social worker who has been assigned the task of aiding a young African exchange student named Isaac in settling into small Midwestern USA life. She is discontent with her job and her life, but both are changed once she meets Isaac. When she first meets him, she apologizes for her loud voice as they head to the university. He tells her that he enjoys the sound of her voice and asks her to continue using it. After a quick visit to the university library, she heads back to her office and immediately nicknames Isaac "Dickens", for his proper English. Shortly afterwards, the pair begin a romantic relationship that has her questioning her life up to this point, especially since she is concerned that she will turn out depressed and lonely like her mother.

For quite some time, the relationship between Helen and Isaac is strictly physical and kept in the house. Helen thinks that it is time to make their interracial relationship public, proving to herself that the attraction is more than physical and the need for a change from the silently racist community is needed. She takes Isaac to a local diner where the patrons show their disapproval. Isaac shrugs it off and eats his lunch as if nothing is going on, but Helen is devastated that her experiment has failed. She then avoids Isaac for a few days until he comes to see her in her office to make sure she is okay.

The relationship goes back to normal for a while, but Helen is beginning to change her mind as the relationship is not as emotional or romantic as she would like. Once again, she avoids Isaac, but she also avoids her home and coworkers as well. Helen's supervisor David confronts Helen after he catches her sleeping in her car. Recharged, Helen decides to confront Isaac about the direction of their relationship. Upon arriving at his home, she finds that Isaac is not there. He does not return that evening and Helen leaves after sleeping in his bed for a while. The next night, Isaac still isn't home. In trying to make the home look more like a home, Helen cooks a plate of eggs although she does not like them. In making a regular dish and setting the table like a house wife would, Helen has an epiphany that she is capable of changing things for the better, even her life and the lives of her clients. She begins with an elderly lady she visits for hours as the lady talks about the life she had before her husband died. This gives Helen some piece of mind as she vows to change things around.

Once Isaac returns, Helen finds out that he has traveled all across the country. She also finds out that he is capable of driving a car. When she goes to visit him after his return, she is turned away at the door by Isaac, although he does not tell her why. Later, she finds out that he has recently been told that his best friend has been killed in Uganda. Helen asks the name of this friend and is shocked to find out that the dead man is the real Isaac Mabira. Helen and Isaac continue to sleep together, and Isaac begins to tell Helen of how he really came to the United States. One morning, Helen decides to use his toothbrush and while doing so, she comes up with the thought that they will never be able to have a happy life together. Immediately, she tells Isaac that she wants to take a trip with him. The pair go to Chicago where Helen reveals that she had originally intended on leaving him there so that he can start a new life away from the bigotry of her small town. She then tells Isaac that she was wrong to do that and that she feels that they can truly have a life together in Chicago. Helen leaves Isaac in Chicago with the promise to return in a few days with all of her things.

More summaries and resources for teaching or studying All Our Names.

All Our Names from BookRags. (c)2022 BookRags, Inc. All rights reserved.