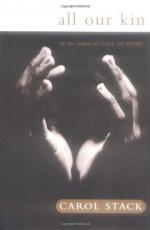 All Our Kin: Strategies for Survival in a Black Community Topics for Discussion

In what ways was this study influenced by the fact that Stack is a white female?

Why does Stack take issue with the "culture of poverty" thesis?

Why is Stack critical of the welfare system which the families in The Flats depend upon for survival?

If the swapping system means everyone ends up receiving about as much as they give, how is it an adaptive and beneficial system as Stack claims?

Why, according to Stack, does the economy depend upon the existence of a pool of poor, unemployed, unskilled people?

Stack mentions that a new health clinic opened up in The Flats, but few availed themselves of its services. Why?

Stack takes issue with the claim that black families are "matrifocal" and yet, according to her analysis, black children are brought into kin networks largely through their mothers. Are these statements compatible?

All Our Kin: Strategies for Survival in a Black Community from BookRags. (c)2022 BookRags, Inc. All rights reserved.