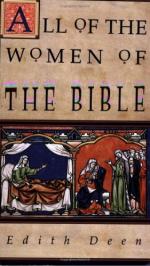 All of the Women of the Bible Setting & Symbolism

Edith Deen
This Study Guide consists of approximately 34 pages of chapter summaries, quotes, character analysis, themes, and more - everything you need to sharpen your knowledge of All of the Women of the Bible.

This is a land governed and populated largely by Jews during part of the story. It is one of the many important locations of the work. It is mentioned repeatedly throughout the entire book. It is viewed as the closest thing to the nation of Israel that could be found on Earth during the era in which the book was written.

This is the town where the Roman census was taken. Hebrews flocked to this town from outlying areas in order to participate. It was during this time that the couple Mary and Joseph had their baby in a manger. They left Bethlehem and headed to Egypt based on information provided by another angel.

This is the still famous nation. However, during the millennium that the Scriptures span, this nation was one of the dominant in the region. Maybe it still is, but for Americans...

More summaries and resources for teaching or studying All of the Women of the Bible.

All of the Women of the Bible from BookRags. (c)2022 BookRags, Inc. All rights reserved.