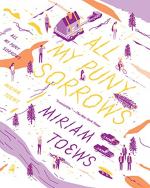 Miriam Toews
This Study Guide consists of approximately 58 pages of chapter summaries, quotes, character analysis, themes, and more - everything you need to sharpen your knowledge of All My Puny Sorrows.

All My Puny Sorrows Summary & Study Guide includes comprehensive information and analysis to help you understand the book. This study guide contains the following sections:

This detailed literature summary also contains Quotes and a Free Quiz on All My Puny Sorrows by Miriam Toews.

• The following edition was used for the creation of this guide: Toews, Miriam. All My Puny Sorrows. Canada: Knopf Canada, 2014. eBook.

All My Puny Sorrows tells the story of Elfrieda (Elf) von Riesen’s suicide. It is narrated by and told from the perspective of her little sister Yolandi (Yoli). Yoli is the author of a series of young adult cowgirl novels and is currently working on a serious novel about sisters. Elf is a successful concert pianist who has always struggled with feelings of overwhelming sorrow. She has finally decided that she simply can’t go on.

As the novel opens Elf is in the hospital after she has unsuccessfully attempted to overdose on painkillers. Her mother, Lottie, found her and called 911. This is Elf’s second suicide attempt, as the reader learns that she has previously tried to starve herself to death.

Yoli has flown to Winnipeg from Toronto to help Elf’s husband Nic and Lottie look after Elf. Nic and Yoli immediately pack Lottie off for a Caribbean cruise so that she can get some much needed rest. They figure Elf will be safe in the hospital so it is a good time for Lottie to have a break.

While this is going on, Yoli is in the middle of divorcing her second husband, Dan. To try to deal with the divorce she has taken two lovers: Finbar, a lawyer in Toronto and Radek, a violinist in Winnipeg. However, Yoli spends most of her evenings with Nic trying to sort out some kind of plan for Elf’s life after she is released from the hospital. They never seem to get anywhere, as Nic thinks Elf has to be forced to take her meds and Yoli thinks her survival instinct has to be shocked back to life. Neither has a viable plan to make Elf do anything.

Lottie returns from vacation and Elf appears to be getting better as she is talking about doing her concert tour. Music has always been the defining passion in Elf’s life and her family hopes that doing the tour will help her re-develop an interest in life.

At this point, Yoli heads back home to Toronto since her son Will, who has been babysitting Yoli’s 14-year-old daughter Nora, needs to get back to university in New York. Yoli is worried because she thought Elf sounded like she was giving a rehearsed speech when discussing her concert, but Yoli doesn’t know what else to do. The hospital can’t keep Elf because she is there voluntarily. Yoli is cheered by the news that Aunt Tina is coming to visit and will help Lottie keep an eye on Elf since Nic works full time. Yoli gets home only to find that Nora has moved a boyfriend in while she was gone. Unsure what else to do, Yoli agrees it is okay as long as they aren’t sharing a room.

Yoli barely has time to settle back into life in Toronto before she is flying back to Winnipeg. This time Tina and Lottie found Elf. She had slit her wrists and swallowed bleach. Back at the hospital Claudio, Elf’s agent, calls off Elf’s tour. As soon as Elf can speaking she is begging Yoli to take her to Switzerland because assisted suicide is legal there. This will save Elf from her fear of dying alone. Yoli, though initially appalled, can’t get the idea out of her head.

As Elf heals in the hospital, Yoli finalizes her divorces. Aunt Tina has a heart attack and is hospitalized. She appears to be getting better, but then worsens to the point where she must undergo what her doctor and nurses call “routine open heart surgery.” Her husband Frank and eldest daughter Sheila fly from Vancouver to be with her. Though the operation appears to be going well there are complications and Tina dies of organ failure. Yoli and Lottie attend Tina’s funeral in Vancouver.

After the funeral, Yoli is forced to return to Toronto because Will must start his summer job in New York and Nora’s father in still in Borneo. Before she leaves the hospital the staff assure Yoli that they will keep her sister in the ward. Yoli makes plans with Nic and Lottie to take Elf to Toronto after her release. The hope is that the change of scene will spark in Elf a will to live. Yoli tells Elf that if this doesn’t happen she will take her to Switzerland.

Back in Toronto Yoli tries and fails to get a bank loan to cover the costs of a trip to Switzerland. Though Elf has the money, her wish to keep the trip from Nic ties her financial hands, since all her accounts are joint. Yoli pounds out a new Rhonda book in the hope that it will bring in much needed funds. She tries and mostly fails to reach Elf by phone, terrified that the delay in her plans will cause Elf to take matters into her own hands.

Elf talks the nurses into issuing her a day pass to celebrate her birthday. After a wonderful lunch with Nic, she sends him to the library for books and throws herself in front of a train. She finally succeeds in killing herself. Yoli packs up Nora, calls Will and they all rush to Winnipeg for the funeral.

After the funeral Lottie suffers a heart attack and has to be hospitalized. It is decided that she will move to Toronto when she recovers. Elf has left Yoli her life insurance money. Yoli uses the money to buy a fixer upper in a low rent neighborhood in Toronto. She gets it livable by the time Lottie arrives from Winnipeg. Lottie deals with her grief by becoming an active part of the community, making friends and joining a church group. Yoli prank calls the Winnipeg hospital at all hours asking to speak to her sister and demanding to know why they let her go. Eventually, after her mother confronts her, she moves on. Nic comes for Christmas and they celebrate Elf’s life. The book ends with Yoli dreaming she and Elf are in Switzerland.

More summaries and resources for teaching or studying All My Puny Sorrows.

All My Puny Sorrows from BookRags. (c)2022 BookRags, Inc. All rights reserved.