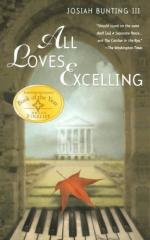 Josiah Bunting III
This Study Guide consists of approximately 32 pages of chapter summaries, quotes, character analysis, themes, and more - everything you need to sharpen your knowledge of All Loves Excelling.

Amanda Bahringer has graduated high school but has not been accepted to the school of her mother's choice, Dartmouth. Her mother, Tess, in an effort to help Amanda reach the goal of acceptance at Dartmouth or some other exclusive, prestigious school, enrolls Amanda in St. Matthew's, a preparatory boarding school with a focus on preparing students for the best colleges. Though Amanda would have been happy with other colleges, Tess holds to the idea that Amanda has to attend Dartmouth and pushes Amanda to excel in all areas. Amanda participates in cross-country track and frantically trains in an effort to run the 5K with a time that will attract the attention of Dartmouth coaches. She plays piano and cello and spends hours at the keyboard in the hope that an outstanding music performance, sent to Dartmouth on tape, will earn her a spot. She takes advanced courses and studies hours every day, hoping that the transcript from the year at St. Matthew's will help her get in. She also participates in a class specifically designed to help her increase her college entrance exam scores.

Amanda puts everything she has into her work at St. Matthews but fails an algebra exam though her final grade in the class is a "C." Each of her actions is viewed by her mother as a failure and Tess berates Amanda, saying that she had obviously failed to focus on her academics in favor of other activities. As Amanda struggles with her mother's disappointment, she believes Tess to be right and sees each failure as a direct result of her own inability to succeed.

The pressure of the hours spent at study, running and piano practice prompts Amanda to begin "self-medicating." By hoarding pills prescribed by her own doctors and combining those with pills taken from her mother's medicine cabinet, Amanda has an impressive supply. She takes several daily, battling anxiety and the need for sleep. Meanwhile, Amanda comes to believe that shaving a few pounds off her weight will increase her running time. The dieting is initially under control if a bit excessive but turns into an eating disorder that has Amanda exercising to extremes of endurance, eating little, binging and purging. Her battle ends when she learns that her newest application to Dartmouth has been "wait listed." She's told that her parents will get the news in a few days and Amanda sits down to write them a letter. The letter is brief, reports the news about Dartmouth and indicates that she's aware her parents have done all they could for her, ending with the idea that it wasn't enough. Amanda then walks to the river, fills her pockets with rocks and walks out until she falls through the ice. Her parents attend the memorial service at St. Matthew's and then return home where the letter from Dartmouth awaits.

More summaries and resources for teaching or studying All Loves Excelling.