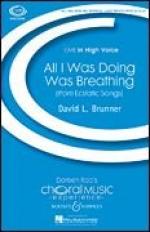 Mirabai
This Study Guide consists of approximately 24 pages of chapter summaries, quotes, character analysis, themes, and more - everything you need to sharpen your knowledge of All I Was Doing Was Breathing.

Rumi: The Book of Love: Poems of Ecstasy and Longing (2003), translated by Coleman Barks, is a collection of poems by the thirteenth-century Sufi poet whose absolute devotion to God resembles that of Mirabai. These poems tell of Rumi's deep desire to lose himself in love for the divine.

The Gift: Poems by the Great Sufi Master (1999) is a collection of poems by Hafiz, translated in colloquial language by Daniel Ladinsky. Like his predecessor Rumi, Hafiz was a fourteenth-century Sufi mystic who wrote short, ecstatic, devotional poems to God.

Kabir: Ecstatic Poems (2004), versions by Robert Bly, is a collection of the verse of a near contemporary of...

More summaries and resources for teaching or studying All I Was Doing Was Breathing.

All I Was Doing Was Breathing from BookRags. (c)2022 BookRags, Inc. All rights reserved.