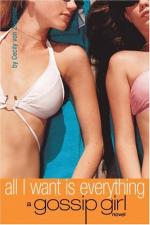 All I Want Is Everything: A Gossip Girl Novel Summary & Study Guide

Cecily Von Ziegesar
This Study Guide consists of approximately 40 pages of chapter summaries, quotes, character analysis, themes, and more - everything you need to sharpen your knowledge of All I Want Is Everything.

All I Want Is Everything: A Gossip Girl Novel Summary & Study Guide Description

All I Want Is Everything: A Gossip Girl Novel Summary & Study Guide includes comprehensive information and analysis to help you understand the book. This study guide contains the following sections:

This detailed literature summary also contains Topics for Discussion on All I Want Is Everything: A Gossip Girl Novel by Cecily Von Ziegesar.

This third novel in the popular "Gossip Girl" series focuses primarily on the romantic relationships of wealthy Blair Waldorf and her circle of friends and acquaintances. As Blair struggles to find the balance between preparing for her academic future and finding happiness in her romantic present her best friend, her ex-boyfriend, and her new step-brother all find themselves caught up in similarly unexpected and complicated relationships. Thematic questions considered include searching for fulfilment, the role of sexuality in relationships, and the importance of being yourself.

The novel begins, as do all the Gossip Girl novels, with an entry from the "Gossip Girl" online gossip column, in which the anonymous author posts titillating comments about individuals referred to only by their initials - B, N, S, A, D, V and J. As the novel itself begins, narration identifies the individuals by name and portrays their circumstances. B is wealthy heroine Blair, N is her stoner ex-boyfriend who is now going out with much younger Jenny (J), and S is Serena, Blair's best friend. A is Blair's new step-brother Aaron, who has a crush on her. D is Jenny's brother Dan, a moody aspiring poet, and V is his girlfriend Vanessa, a moody aspiring filmmaker.

As Christmas approaches, all the characters make plans to indulge their regular Christmas traditions, many of which involve travel. In the case of Blair and Aaron, they have been invited to join their respective parents (Blair's mother Eleanor and Aaron's father Cyrus) in St. Barts, where the two are celebrating their honeymoon. Blair and Aaron have been told they can invite a friend each, so Blair is taking Serena, while Aaron is taking his wealthy friend Miles who, like Aaron himself, has a crush on Blair. At the same time, several of the characters are also making plans for their futures in college. Blair is determined to get into Yale, her father's alma mater, but becomes angrily frustrated when her entrance essay is deemed unsuitable, and she has to rewrite. She almost decides to not go to St. Barts, but at Serena's insistence ends up going. For her part, Serena goes on the trip in part to avoid the troublesome attentions of a famous pop star who has become smitten with her. Meanwhile, Nate and Jenny are spending more and more time together, Nate seemingly unaware that Jenny is falling deeply and desperately in love with him. Finally, Dan struggles with writer's block which he comes to believe is triggered at least in part by sexual frustration, while Vanessa (who has more sexual experience than he does) struggles to figure out how to move both her relationship and her filmmaking career forward.

Complications for each of the characters begin to emerge. Blair has trouble with her essay and is also shocked by the news that her mother is expecting a child. Serena is attracted to Aaron, who in turn, is frustrated in his guilty attraction to Blair by the attention paid to her by Miles. A video filmed by Vanessa of Nate's and Jenny's romantic encounter in Central Park makes its way onto the Internet, where it becomes an unexpected sensation and causes difficulty for Jenny at home. Dan's writer's block comes to an end when he writes a scathing poem about what he sees as the slutty behavior of the women in his life, a poem that Vanessa sees as having outstanding quality and, much to Dan's anger, submits for publication.

Blair and Serena return quickly and unexpectedly to New York, where Blair hunkers down to focus on her essay and Serena plans a fabulous New Year's Eve party. Most of the main characters (with the exceptions of Dan and Vanessa) converge at the party, with Serena getting rid of the musician and hooking up with Aaron, Blair, and Jenny both getting over their feelings for Nate. Meanwhile, out in Central Park Dan watches Vanessa make a film and realizes how talented she is. The two of them acknowledge their love and desire for each other, and kiss passionately.

Throughout the narrative, comments by "Gossip Girl" reflect on, and foreshadow the action. At the book's conclusion, one last "Gossip Girl" commentary hints at questions to be explored in future books.

More summaries and resources for teaching or studying All I Want Is Everything: A Gossip Girl Novel.

All I Want Is Everything: A Gossip Girl Novel from BookRags. (c)2022 BookRags, Inc. All rights reserved.