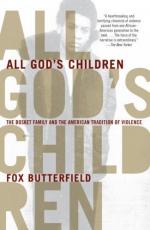 The South Carolina County with an unusually violent history and where Aaron Bosket was a slave.

Butch and his family moved to Harlem in the 1950s, assuming it would bring the same promise to the Boskets that it brought to other blacks in the 1920s. They were disappointed. The Boskets have mostly lived in Harlem since then.

The city where Butch killed two men in a pawnshop.

The maximum security prison where Butch was initially imprisoned before he went straight.

The juvenile detention facility where both Willie and Butch spent a portion of their childhood and where they both showed their most promise.

The code of honor that encourage men to act violently to maintain honor that was imported into South Carolina...