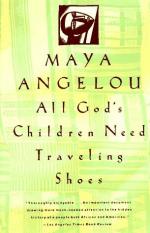 Maya Angelou
This Study Guide consists of approximately 35 pages of chapter summaries, quotes, character analysis, themes, and more - everything you need to sharpen your knowledge of All God's Children Need Traveling Shoes.

This detailed literature summary also contains Topics for Discussion and a Free Quiz on All God's Children Need Traveling Shoes by Maya Angelou.

All God's Children Need Traveling Shoes is the fifth installment in a series of narrative memoirs by the poet and writer Maya Angelou. This installment recalls several years in the mid-sixties that Ms. Angelou spent in Ghana discovering the Africa of her ancestry. This book opens the reader's eye to the turbulent time of the Civil Rights Movement, introduces key figures of that time period and explores the ancestry of a people taken wrongly from their homes. Maya Angelou is a celebrated poet, writer, performer and producer. With All God's Children, Ms. Angelou opens a deeply emotional time in her life and shares it with the world.

Ms. Angelou arrived in Ghana in 1962 to settle her son, Guy, in university before moving on to a new job and a new life. However, an accident in which her son broke his neck forced Ms. Angelou to remain in Ghana. After a period of intense mourning and self-pity, Ms. Angelou found herself searching for a job and a place to live with the assistance of newly made friends. Soon, Ms. Angelou had a job at the same university she had come to enroll her son in and was living at the local YMCA.

Ms. Angelou, normally an outgoing person, quickly made friends among the other lodgers at the YMCA. Ms. Angelou and two of these friends, American Returnees Alice and Vicki, decided to get a house together. Their living room soon became a meeting place for other American Returnees. Often there would be great political discussions that would last late into the night at their home or the home of a mutual friend, Julian Mayfield. With the quick recovery of her son, Ms. Angelou soon found comfort in her new life in Africa.

Guy attended classes at the university, while Ms. Angelou did clerical work at the university and helped a professor and friend with the production of her many plays. Ms. Angelou even starred in one of these productions. However, Ms. Angelou realized the pay would never help her pay off her son's tuition and the car she had purchased. Ms. Angelou went to the local paper and offered her skills as a writer. She was hired on the spot to write a piece about the racial unrest in America. However, this job too would only pay the local minimum. Ms. Angelou went to the local broadcasting office to offer her services there and was quickly dismissed by the unfriendly receptionist. This episode caused Ms. Angelou to rethink her ideas of discrimination and to ponder why the Africans did not welcome the American Returnees with open arms.

While living in Ghana, Ms. Angelou and her housemates employed a houseman who helped with the cooking and cleaning. This man, Otu, had a cousin whom he persuaded Ms. Angelou to take on as her small boy, or servant. In the beginning, Ms. Angelou was reluctant because money was tight. When she discovered the boy wanted to go to school as well, she felt she had been tricked into providing this for him. However, Ms. Angelou later found out the boy came from a wealthy family and had been sent to her simply to learn from her the white ways, as his family described her knowledge.

In Ghana, Ms. Angelou met a tribal king, Nana Nketsia, who became one of her champions, searching for a higher paying job for her. Ms. Angelou also participated in the organizing of a march across from the American Embassy on the same day of Martin Luther King, Jr.'s march on Washington. Ms. Angelou also met Malcolm X when he came to Ghana to gather support from various governments as he made a bid to visit the United Nations and present the plight of the black American. Ms. Angelou was chosen to drive Malcolm around to his various meetings and had many private discussions with him in regards to civil rights, as well as subjects of a more personal nature. Malcolm showed Ms. Angelou pictures of his children on several occasions, expressing how much he missed them.

Shortly after Ms. Angelou had an argument with her son regarding his right to live his own life, she took a part in a play that was performed in Germany and Venice. While in Germany, Ms. Angelou made the acquaintance of a German couple who invited her to breakfast at her home. Ms. Angelou took along a black Jewish actor she had met at the hotel bar. The breakfast proved to be tenser than Ms. Angelou had expected. With relief, Ms. Angelou returned to the hotel and the play. When the play finished its run, Ms. Angelou took a side trip to Cairo, Egypt to visit some old friends and to meet up with Julian and others during a conference there. At a party for the Liberian president, Ms. Angelou was invited to sing, an experience that was deeply touching to her.

Toward the end of Ms. Angelou's time in Ghana, shortly before she would return to the states to head up an office of the Organization of Afro American Unity for Malcolm X, Ms. Angelou took a trip to the western edge of Ghana to a village called Keta. While in route to this small village, Ms. Angelou experienced a strange episode in which she was grasped with unexplainable fear when faced with crossing a bridge into the village. Later, in the marketplace, Ms. Angelou was mistaken for a relative of some of the villagers who had been taken by the slavers many, many years before. This experience finally gave Ms. Angelou the sense of coming home she had searched for since coming to Africa.