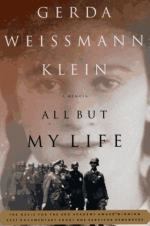 All But My Life Summary & Study Guide

Gerda Weissmann Klein
This Study Guide consists of approximately 32 pages of chapter summaries, quotes, character analysis, themes, and more - everything you need to sharpen your knowledge of All But My Life.

All But My Life Summary & Study Guide Description

All But My Life Summary & Study Guide includes comprehensive information and analysis to help you understand the book. This study guide contains the following sections:

This detailed literature summary also contains Topics for Discussion and a Free Quiz on All But My Life by Gerda Weissmann Klein.

All But My Life by Gerda Weissmann Klein is the true story of her family's tragic struggle as Polish Jews during the German invasion in World War II. Their family, relatives, and friends, along with the young teen's hopes and dreams,y are destroyed by the invading Nazis. The reader must be prepared for a touching, emotionally wrought story that will bring the hardest of hearts to tears. That these actual experiences happened within the last seventy years is unthinkable. No measure of understanding can be applied to the barbaric treatment of one group of human beings by another as described in this story. Everyone knows the story of the Holocaust in a historic sense. But reading and absorbing the details, the humiliation, fear, terror, and pain that Gerda and her family are forced to endure touch the very soul of the reader.

Gerda is a happy and popular fifteen-year-old girl in the town of Bielitz when the Germans invade. She lives with her mother, Helene, father Julius, and older brother Arthur. The family is close and loving. Julius is the part-owner of a fur factory in town. Helene is a loving and nurturing mother who dotes on her two precious children. Gerda has many girlfriends around town and is an intelligent and creative young student with a spirit that proves later to be essential to her very survival. The Jews in Bielitz are required to register. This registration allots them less food than others and marks them for further hardship and humiliation. Eventually, the Germans take all their valuables and possessions. Gerda's pleasant family home had been in Helene's family for decades. The Germans force the Weissmanns to move in their cellar while a German family moves into their former living quarters upstairs.

Arthur is the first family member sent off to a labor camp. His touching departure is a heart-wrenching scene. While Helene tries to stay positive and strong, Julius, who is ill, cannot bear seeing his son go off to an uncertain future and is reduced to sobs, never fully recovering. After two years of occupation in their hometown, Gerda and her parents learn that they will be sent to labor camps. Julius is sent off to a male camp in the opposite direction of the female camp Gerda and Helene are sent to. Gerda sadly watches her father standing on the back of the train fade off in the horizon. Gerda and her mother are at the same female camp for a short period before they are separated. Gerda is sent to another labor camp while her mother is sent to a death camp. Although Gerda holds out hope for years, she never again sees her parents or brother again.

Over the four years Gerda is in forced labor camps she goes through unspeakable horrors and humiliation. Gerda becomes friends with many of the girls at these various camps. She sees many die of disease, mistreatment, or despicable living conditions. Once the Allied Troops start advancing, girls from several camps are amassed. The girls, numbering in the thousands, are forced to march for months to elude the advancing armies. Many of the girls die from exposure, beatings, or murder along the way. There are only 125 surviving girls once they reach Volray, Czechoslovakia, the town in which they are finally liberated. It takes Gerda, who weighs only sixty-seven pounds, months to recover her health. The first US soldier she meets on the day of her liberation is Kurt Klein. They fall in love and marry a few years later and move to the US. Gerda becomes a lecturer and author, a way to honor and keep alive the memory of her beloved family and to remind the world to never let anything like this horror happen again.

More summaries and resources for teaching or studying All But My Life.

All But My Life from BookRags. (c)2022 BookRags, Inc. All rights reserved.