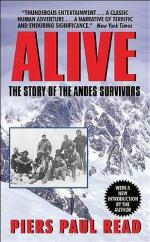 Alive: The Story of the Andes Survivors Summary & Study Guide

Piers Paul Read
This Study Guide consists of approximately 37 pages of chapter summaries, quotes, character analysis, themes, and more - everything you need to sharpen your knowledge of Alive.

Alive: The Story of the Andes Survivors Summary & Study Guide includes comprehensive information and analysis to help you understand the book. This study guide contains the following sections:

This detailed literature summary also contains Topics for Discussion and a Free Quiz on Alive: The Story of the Andes Survivors by Piers Paul Read.

Alive is the story of an airplane flight that crashed over the Andes mountains. It is also the story of how some of the stranded passengers survived following the crash and their reintegration into the society they left behind. Upon its departure on October 12, 1972, the Fairchild flight carried forty-five people. This number included the Old Christians Rugby team, of which there were fifteen team members, who had charted the plane. Also on board were twenty-five friends and family of the team and the plane's crew of five. All of the Old Christians team players were alumni of Stella Maris College and as such they had long-standing friendships. They were in jovial spirits when they boarded the plane in Montevideo, Uruguay. Air patterns in the Andes mountains can be treacherous. The plane was grounded in the afternoon because of poor weather but resumed its flight the following day under more favorable conditions. The flight seemed to be going well, and the pilot prepared to descend to their destination, Santiago. A minute later the plane lost all contact and plummeted into the Andes mountain range.

The Chilean and Argentinian governments searched for the lost plane for eight days with no results. During this, time the survivors of the crash took inventory and tended to the wounded as much as possible. They subsided off very little food. The Fairchild was not stocked with food, so the meager nourishment available to them consisted of souvenirs purchased for friends and family—mostly chocolate and wine. The area in which they crashed was barren of life, and it was winter, so there were no natural resources (aside from frozen water) to forage. After two full weeks in the mountains, the survivors were weak. Even though they rationed the food and divided it equally, it had run out. They were now full into the winter season, and conditions grew increasingly harsh. An avalanche over came them while they were sleeping, and another eight lives were lost. Morale was low and the passengers began to think less of being rescued and more about surviving until Spring when a rescue would be feasible. In order to facilitate this they began to eat the muscle and flesh of their deceased peers, whose bodies had been preserved in the sub zero conditions since the day of the crash.

While the decision to eat human flesh was difficult, it was necessary. This source of nourishment lasted them through the winter. Through some ingenious designing, they cooked meat, made mittens, and created hammocks in which the wounded to rested. They selected two strong men to hike out of the mountains and find help for the others. When Spring came, the two men were finally ready. The two expeditionaries, Canessa and Parrado, set out with their make-shift gear and frozen meat stores. They trekked a grueling sixty miles through snow-covered mountains before finding civilization. Because of the altitude, the hike took ten days. It had been a total of seventy days since the Fairchild had crashed. While the government agencies had officially stopped the search months earlier, they resumed the search after Canessa and Parrado's return. The remaining survivors were evacuated on December 22, 1972. All were brought first to a base camp, then inland to the hospital of St. John of God in San Fernando. Amazingly, their injuries were few, although they had all suffered from starvation and its associated weight loss. The survivors' reunions with their friends and family were bittersweet. The men had been barely surviving for so long that the world to which they returned was overly stimulating. Their newfound appreciation for life and God made everything else seem unimportant and excessive. The media jeered and took pictures, but for the most part the men, newly accustomed to quiet, just wished for solitude.

More summaries and resources for teaching or studying Alive: The Story of the Andes Survivors.

Alive: The Story of the Andes Survivors from BookRags. (c)2022 BookRags, Inc. All rights reserved.