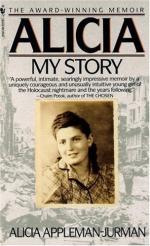 This is a local group of Jewish men in Buczacz formed to act as liaison between the Jews and the Nazis.

This is a small town in which Alicia lived, first occupied by Russians and then Nazis.

This is the Jewish term for raids by Nazi on the ghetto residents.

This is the Nazi prison in which Alicia was incarcerated and then released following the Nazi contamination of the drinking water with typhoid fever bacteria, in the hopes that those released would take the disease back to the ghetto.

This is a secret organization of Jewish Zionists that secreted Jews into Israel, against British law.

These are gangs of Ukrainian youth who collaborated with the Nazis in persecution of the Jews.

This is the term for the American Jewish Joint Distribution Committee, a U.S.-funded organization that...