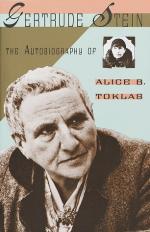 The Autobiography of Alice B. Toklas Summary & Study Guide

Gertrude Stein
This Study Guide consists of approximately 25 pages of chapter summaries, quotes, character analysis, themes, and more - everything you need to sharpen your knowledge of The Autobiography of Alice B. Toklas.

The Autobiography of Alice B. Toklas Summary & Study Guide Description

The Autobiography of Alice B. Toklas Summary & Study Guide includes comprehensive information and analysis to help you understand the book. This study guide contains the following sections:

This detailed literature summary also contains Topics for Discussion on The Autobiography of Alice B. Toklas by Gertrude Stein.

The first chapter of the book, “Before I Came to Paris,” relates the childhood of Alice, who was born in San Francisco, California, to a wealthy family. Alice lived with her father and brother in San Francisco until the great fire in 1906. Shortly thereafter, Alice moved to Paris, where she met Gertrude Stein on her first day in the city on September 8, 1907.

In the second chapter, the author describes Alice's first years in Paris amongst the Parisian avant-garde. Alice inherited the social circles of Gertrude Stein, which included the painters Pablo Picasso and Henri Matisse, among many others. The age of Cubism was beginning, and the artists of this movement were constant guests at the Saturday evening dinners hosted by Stein and Toklas at their home at 27 rue de Fleurus.

The narrative shifts back in time in the third and fourth chapters to relate the childhood and education of Gertrude Stein and her first years in Paris. Stein was born in Allegheny, Pennsylvania, and raised in Oakland, California, after spending the first few years of her life in Europe. She completed college at Radcliffe College and then enrolled at Johns Hopkins Medical School, but left after two years without a degree.

Gertrude then moved to Europe to join her brother Leo, who was an art critic and collector. They moved to Paris and began collecting paintings and art together, amassing a fine collection of works, including those by Cézanne, Daumier, Manet, and Gauguin, among others. When they began collecting works by Matisse, the painter met with them and they became fast friends. At this time, Gertrude and Leo also met with and befriended the painter Pablo Picasso and began purchasing his works. Picasso completed his famous portrait of Gertrude Stein after over ninety sittings.

The fifth chapter, “1907-1914," describes the events when Alice and Gertrude lived together in Paris. Alice had spent a great deal of time at the Stein home helping correct the proofs of Gertrude's epic novel, “Three Lives”, and having typewritten Stein's “The Making of Americans”. Alice and Gertrude traveled together frequently, spending summers in Spain, England, Venice, and Florence. Eventually, Leo Stein decided to move to Florence, and he and Gertrude divided the art they had bought together, with Leo taking the Renoirs and Matisses and Gertrude keeping the Cézannes and Picassos.

In Chapter 6, “The War," the narrative relates the outbreak of World War I and its impact on Gertrude Stein, Alice B. Toklas, and the modern art scene in Paris. When the war broke out, Alice and Gertrude were staying in the English countryside with Dr. Alfred Whitehead and his family. They were invited to stay the weekend and ended up staying for six weeks, until they were able to return to Paris after the battle of the Marne and the retreat of the Germans.

In the summer of 1915, Gertrude and Alice decided to get away from the war and go to Palma de Mallorca at the suggestion of their friend William Cook. They went to Palma only to spend a few weeks, but ended up staying through the winter. When they were back in Paris, they decided to volunteer for the American Fund for French Wounded.

Gertrude Stein wrote to a cousin in America and secured an early Ford automobile that she and Alice used to deliver supplies to French hospitals. The armistice between the Allies and Germany was signed on November 11, 1918, ending the war. At this point, Alice and Gertrude traveled to Alsace where inhabitants were returning to their ruined homes. After this, they returned to Paris.

In the final chapter, the narrative relates the events after the war, in which many of the old crowd had disappeared. Gertrude Stein and Alice Toklas met many new artists and writers, including Ezra Pound, Man Ray, Sherwood Anderson, Robert Coates, Alfred Kreymborg, Kate Buss, Djuna Barnes and Mina Loy. Gertrude became interested in the paintings of Andre Masson, who fell under the influence of the surréalistes.

Because of the impossibility of getting Gertrude Stein's works published, Alice Toklas began to look into publishing them herself, which would involve having the works printed and then distributed. She published a number of Stein's books in this way, and later a French publisher agreed to publish a French translation of “The Making of Americans”.

The book closes with Gertrude Stein's tongue-in-cheek humor regarding the book's genre. As she had suggested to Alice to write her own autobiography but it never came to pass, Gertrude decided to write the book herself. "And she has and this is it".

More summaries and resources for teaching or studying The Autobiography of Alice B. Toklas.

The Autobiography of Alice B. Toklas from BookRags. (c)2022 BookRags, Inc. All rights reserved.