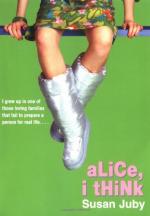 Susan Juby
This Study Guide consists of approximately 31 pages of chapter summaries, quotes, character analysis, themes, and more - everything you need to sharpen your knowledge of Alice, I Think.

This detailed literature summary also contains Topics for Discussion on Alice, I Think by Susan Juby.

Alice, I think is a novel written by Susan Juby. The story is recounted through the journal entries of Alice, the main character. Alice was raised by parents who are hippies and all about expressing their feelings. When Alice reads the book The Hobbit, she decides that she is a hobbit. Her parents support her. Alice goes to school dressed like a hobbit and that is the day that she realizes that she is not like everyone else. Alice finds out that there are consequences to being weird.

Alice quickly became the victim of bulling and her parents immediately took her out of school. Being home-schooled only adds to Alice's weirdness. Her parents make her go to therapy in an attempt to help her social skills. Alice's therapist ends up having a mental breakdown and is taken away. Alice blames herself for her therapist losing it and when she gets a new therapist she does everything in her power to make sure that she doesn't push him over the edge.

Bob, the new therapist, challenges Alice to set some goals that she feels will help instill some positive changes in her life and help her be happier. Alice makes a list of goals which she thinks will help her and she gets started on trying to accomplish these goals as soon as possible. Some of the goals Alice set for herself include: Getting a new look, making friends outside of her family, deciding on what she wants to do for a career, meet people of the opposite sex, and learn to drive. Alice wants to make sure that her therapist is pleased with her out of fear of making him go crazy so she tells him that she is planning to go to school. Bob is so excited that he enrolls her right away. Alice takes the opportunity to create a new look for herself.

Alice goes to get her hair cut as the first step to her makeover and it goes horribly wrong. As she is in the parking lot of the mall with her hideous hair, her childhood bully, Linda, finds her and picks up where she left off with the bulling. Only this time when Alice's mom comes to the rescue, Linda beats her up. Suddenly Alice's life has become more complicated and it's only going to get worse with school.

Alice meets a guy and though she finds him annoying, she tries to make it work with him because it is one of her goals to date. When it doesn't work out, she moves on to some of her other goals. After stressing out about her goals Alice finally meets a boy named Daniel that helps her realize that happiness is not achieved through setting unrealistic goals. Alice is finally happy with her life and open to whatever comes next.

More summaries and resources for teaching or studying Alice, I Think.