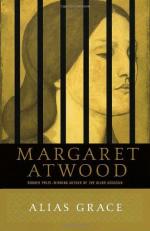 Margaret Atwood
This Study Guide consists of approximately 43 pages of chapter summaries, quotes, character analysis, themes, and more - everything you need to sharpen your knowledge of Alias Grace.

In the novel Alias Grace, author Margaret Atwood retells the story of Grace Marks, a real nineteenth-century Canadian woman who was accused of, and spent thirty years in jail for, the murder of two people. These murders were the most sensationalized story of the mid-1800s, and accounts of the trial and aspects of Marks's life were well publicized. Atwood was first attracted to this story through the works of so-called Canadian journalist Susanna Moodie, who wrote about a wildly crazy Grace Marks. Atwood admits that at first she believed Moodie's recounting of the circumstances that surrounded this famous murderess. In fact, Atwood wrote a collection of poems called The Journals of Susanna Moodie and also a television script based on Moodie's version of Grace Marks's life. Atwood's interest in Marks waned for several years, but when it resurfaced, she dug deeper into the story. That was when she discovered numerous discrepancies in Moodie's work and decided to write her own version of Marks's story.

In real life, Grace Marks, a sixteen-year-old Irish immigrant, was sentenced to life imprisonment for her role (which was never fully defined) in the murder of her employer Thomas Kinnear and his housekeeper Nancy Montgomery. Kinnear and Montgomery were having an affair, and many people have speculated that Marks, who was recently brought into the Kinnear household as a servant, was jealous. Montgomery, after all, was a maid, not the mistress of the house, and Marks resented Montgomery's airs of superiority. At least, that is one version of the story. Marks claimed various interpretations of her involvement in the murders, including one in which she states that she could not remember what happened on the day of the murders and another in which she claims to have been temporarily possessed by a dead girlfriend of hers. Alias Grace does not solve all the puzzles of this mystery, but it does present a patchwork story, details of which come from a variety of real sources as well as from Atwood's imagination, thus leaving readers to come to their own conclusions.

Alias Grace, Atwood's ninth novel, became a bestseller in North America, Europe, and in other countries around the world. The book helped win Atwood several literary prizes including the Premio Mondello, Salon Magazine's best fiction of 1997, the Norwegian Order of Literary Merit, the Giller Prize, and the Canadian Booksellers Association's Author of the Year award.

More summaries and resources for teaching or studying Alias Grace.

Alias Grace from Gale. ©2005-2006 Thomson Gale, a part of the Thomson Corporation. All rights reserved.