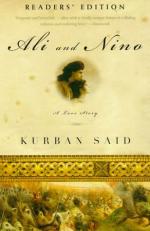 This detailed literature summary also contains Topics for Discussion and a Free Quiz on Ali & Nino by Lev Nussimbaum.

Ali and Nino by Kurban Said is a tragic love story set in Russian-ruled Caucasia and Persia at the time of World War I. The young protagonists reflect the tensions of East and West in times of joy and despair, showing that love can rise above ideology and centuries-old hatred.

Ali and Nino opens in Baku, a town transformed by the discovery of oil. The Tartars like Ali Khan Shirvanshir resent the governing Russians and the influx of Western culture and mores. Ali as a schoolboy falls in love with beautiful Nino Kipiani, a royal Georgian Christian. Before they can marry, however, World War I erupts. Ali's friends enlist in the Russian army, but Ali bides his time until his homeland is actually threatened. Ali's freedom is removed when Nino is kidnapped by erstwhile friend Malik Nachararyan. Ali pursues and murders the culprit, opening a blood-feud, which force Ali to flee to the wilds of Daghestan. There he becomes a prodigal son, wallowing in wine and hashish, which Nino hears about and comes to verify. They make love, get married, and live happily until word comes that Baku is safe.

That peace, however, is short-lived and after Ali distinguishes himself in warfare, they go into exile in Persia. It is not a shabby exile, for a branch of the Shirvanshirs lives there, close to court. Life in Teheran is familiar and pleasant for Ali, but a horrible never-ending trial for Nino, who is kept house-bound in the one-woman harem, and badgered about her behavior. Egged on to find meaning in life by participating in the bloody Shiite rites of Tenth of Moharram, Ali faces a wife who hates him and insists on leaving.

The times allow the Shirvanshirs to return to Baku and to take part in leadership of the Republic of Azerbaijan. Entertaining dignitaries in their Western-style home, breaking taboos and making even Nino uncomfortable becomes a daily duty. Ali turns down a transfer to the Consulate in Paris, which Nino had coveted. He cannot bear to leave his homeland. Parenthood creates additional stresses, and the family takes a vacation. During it, they learn of a massive new Russian invasion, intent on controlling the oil reserves. Ali remains to defend his homeland, promising to join Nino and the baby in Tiflis. Ali is killed manning his machine gun, however, and old friend Iljas Beg jots on the last page of the journal that Ali has been keeping—the present book—that he hopes to get the story to Nino some day.