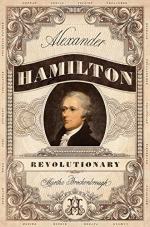 Saint Croix was the birthplace of Alexander and where he was eventually discovered by Hugh Knox for his writing talents. It was one of the sugar islands in the West Indies, and was a highly popular spot for entrepreneurs attempting to amass a fortune in the sugar trade. It was also a prime port of commerce, where Alexander learned all about international trade during his work at Beekman and Cruger, a powerful trading company. There were an abundance of slaves on the islands, and many of the white nobles feared an uprising due to the horrendous working conditions. The islands were also extremely vulnerable to natural disasters, such as the hurricane that prompted Alexander to write to his father about the destruction.

New York was the first place Alexander traveled to when he arrived in the colonies. It was a melting pot of numerous...