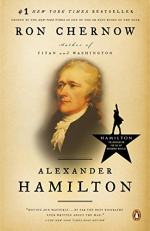 Alexander Hamilton is the first Secretary of the Treasury of the United States of America under George Washington’s administration, is the husband of Eliza, and the father of seven children. Hamilton is regarded as brilliant, courageous, and prophetic, though his overconfidence and pride often get in his way.

Born illegitimately in Nevis on January 11, 1755, Hamilton works as shipping clerk and gains local fame for his writing talents. Funded by locals to study in New York at King’s College, Hamilton comes to serve alongside George Washington during the American Revolution. During the Revolution, Hamilton marries Eliza Schuyler, and two go on to have seven children. After the Revolution, Hamilton becomes a delegate to the Constitutional convention, and then, along with Madison and Jay, authors the Federalist papers in support of the document.

With Washington’s election, Hamilton comes to serve as Secretary of State, where...