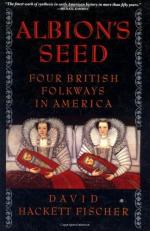 "This series seeks to combine story-telling and problem-solving in a 'braided narrative' of more complex construction.
"In all of those many ways, this idea of cultural history rests upon and assumption that the old and the new history are not two disciplines but one," (p. ix)

"First was the idea of depravity which to Calvinists meant the total corruption of 'natural man' as a consequence of Adam's original sin," (p. 23).

"The second idea was that of the covenant. The Puritans founded this belief on the book of Genesis, where God made an agreement with Abraham, offering salvation with no preconditions but many obligations," (p. 23).

"The third idea was the Calvinist doctrine of election-which held that only a chosen few were admitted to the covenant," (p. 23).

"Religion was not as central to the origins of the Chesapeake colonies as it had been in New England. But the founders of...