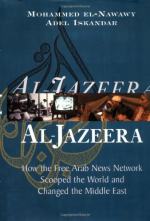 The following version of this book was used to create this Study Guide: El-Nawawy, Mohammed and Iskandar, Adel. Al-Jazeera: How the Free Arab News Network Scooped the World and Changed the Middle East. Westview Press, 2002.

Al-Jazeera is a non-fiction book about the Arabic-language news network of the same name. The book is divided into eight chapters plus an epilogue, with each chapter focusing on one aspect of the network.

The first chapter, “We Are What We Watch,” sets the tone of the book by providing the reader with an example of an Arab family living in Canada which relies on Al-Jazeera for its daily news. Each family member provides reasons for its approval of Al-Jazeera, and some present their criticisms, foreshadowing the kind of commentary from observers of Al-Jazeera which el-Nawawy and Iskandar will continue to include throughout the book, presenting both positive and negative opinions. The chapter closes with a reflection on the Arab public mentality and the way that this mentality is unified across borders and seeks to see itself represented more in mainstream media. Al-Jazeera is presented as the news network which has so far best represented and been most influential to the Arab public mentality.

The second chapter, “A Major League Channel in a Minor League Country,” describes Al-Jazeera’s rise to fame at the start of the war in Afghanistan and outlines the network’s creation with Qatari government funding, since Qatar is the host country In which Al-Jazeera’s headquarters can be found. The chapter also describes the way that Al-Jazeera’s influence worldwide has eroded that of Egyptian and Saudi Arabian media networks, and explains that the freedom of speech that the network stands for may in part be due to the fact that Qatar’s emir, Sheikh Hamad, is actively trying to move his country into a more democratic direction.

The third chapter, “The Battle for the Arab Mind,” discusses the potential that Al-Jazeera’s popularity and commitment to presenting multiple (often controversial) perspectives on a given topic can help politically mobilize Arabs in the Middle East and abroad. The state of free press, biases in the media, and the promotion of civil rights are all explored in the context of Al-Jazeera and its large viewership, with el-Nawawy and Iskandar hoping that the network can create a greater awareness of civil rights among its audience.

In the fourth chapter, “Big Voice, Tiny Country,” the authors once more take a look at Qatar in order to evaluate whether Al-Jazeera’s content stems from Qatari policy, or whether Qatari policy possibly is changed and affected by the reception of Al-Jazeera among its audience. Several critical Arab government stances are outlined in this chapter.

The fifth chapter, “Boxing Rings,” discusses “The Opposite Direction” and other talk shows aired on Al-Jazeera, pointing out that most of these shows bring together guests of radically opposing political or religious views and feature skilled hosts who provoke the guests into fiery debate. These talk shows are often watched by millions and can touch upon extremely sensitive issues, such as U.S.-Middle Eastern relations, the Israel-Palestine conflict, etc.

“Hero or Heretic?” is the sixth chapter of the book and once more explains the reason behind many Arab governments’ criticisms of Al-Jazeera. Saudi Arabia, Egypt, and Bahrain are just some of the countries that have either strenuous or, at the very least, ambiguous relations with the network, which el-Nawawy and Iskandar state does not interfere with Qatari foreign policy as a whole.

The seventh and eighth chapters are called “Al-Jazeera Scoops the World” and “Al-Jazeer and the West,” respectively, and they further elaborate on the network’s unique rise to celebrity through the war in Afghanistan and the airing of the Osama bin Laden speech, which ultimately put the network on the global map and shifted away from the Western (primarily U.S.-led) monopoly of information dissemination. The West faces trouble approving of Al-Jazeera’s continued broadcasting of bin Laden’s perspective, but the U.S. especially acknowledges that given the great amount of anti-American sentiment felt by Arabs in the aftermath of the American actions in Afghanistan, it would be beneficial to work alongside Al-Jazeera instead of against it, in order to influence the Arab public mentality.

The epilogue reads like a run-through of the authors main points and the main controversies surrounding Al-Jazeera. The authors provide their own opinions and suggestions for the network moving forward, stating that it should begin to broadcast news in English as well as Arabic and that it should be more critical of the Qatari government in order to prove its detractors wrong when they accuse the network of being critical of every Arab country except their host country.

In “Al-Jazeera,” el-Nawawy and Iskandar weave their own views into the text but rarely explicitly state their beliefs about a given theory or contested claim, choosing instead to allow Arab government officials, Al-Jazeera’s own network officials, and other individuals to speak their minds and allow the reader to view both sides of the story.In this regard, the authors adhere to Al-Jazeera’s motto and present “the opinion and the other opinion” (206).