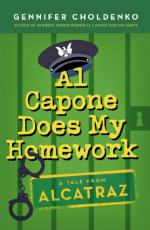 Gennifer Choldenko
This Study Guide consists of approximately 52 pages of chapter summaries, quotes, character analysis, themes, and more - everything you need to sharpen your knowledge of Al Capone Does My Homework.

Al Capone Does My Homework Summary & Study Guide includes comprehensive information and analysis to help you understand the book. This study guide contains the following sections:

This detailed literature summary also contains Quotes and a Free Quiz on Al Capone Does My Homework by Gennifer Choldenko.

The following version of the novel was used to create this study guide: Choldenko, Gennifer. Al Capone Does My Homework. Puffin Books, August 20, 2013.

Life is tough for thirteen-year-old Moose Flanagan, the narrator of the novel Al Capone Does My Homework by Gennifer Choldenko. He has to watch out for his older sister Natalie, make sure his father does not get hurt at his prison job, and try to keep his friends out of trouble. It is only after he feels he has allowed his world to spin totally out of control that he begins to learn that he is not expected to be responsible for everything that happens.

On his father’s first day as associate warden at Alcatraz prison, Moose sees one of the inmates spit on him. He learns from Piper, the warden’s daughter, that the inmates have a game where they get points for doing things like spitting on a warden. The inmate with the most points gets bragging rights. Moose fears for his father’s safety and believes he is responsible for keeping him from getting hurt. Moose’s responsibilities do not end with his father. He also feels that it is his responsibility to keep his sister Nat, who is a bit unusual, out of trouble.

That night, when his parents are out celebrating the new job, Moose wakes to discover his apartment is on fire. He and his sister are able to get out safely, but Moose blames himself for the near tragedy because he went to sleep while he was supposed to be babysitting. To make matters worse, neighbors in the apartment building openly blame Nat for setting the fire.

In order to ease his own sense of guilt and prove Nat was not responsible, Moose and his group of friends begin investigating the fire. They do not prove who set the fire, but they do notice several other strange occurrences around the island that houses the prison. One man cheats at a friendly poker game. The children have heard he owes money to loan sharks. They see an inmate place a note for someone on the outside but are not able to understand the meaning of that note. Piper, one of the girls in their group, suddenly has money she uses to buy gifts and pay others to do errands for her.

After eavesdropping as the associate warden and guards interview prisoner Al Capone about the fire in Moose’s apartment, Piper tells Moose and friend Annie where she has been getting her money. She had read in a newspaper that stores in San Francisco reported having items bought with counterfeit cash. Piper had shopped in all of those stores with money that she had found in her clothes after they came back from the prison laundry. She claimed not to think anything strange about what was happening, but Moose told her she had to tell her father what she had been doing. The information led the warden to discover inmates were getting counterfeit money from someone on the outside and funneling it through Piper.

Meanwhile, Moose’s father is seriously injured when an inmate steals a butcher knife from the kitchen and stabs him. Moose is overcome with guilt because he saw what was about to happen but was so frightened he was unable to scream and warn his father. He did throw a baseball that hit the inmate and, perhaps, kept his father from getting killed. Moose's friends help him to understand that he did the best he could to look out after his father, but that he was not able to control the actions of the inmates.

Afraid for her father, Nat wants to go to the hospital. Since the fire in the apartment, Moose’s mother had wanted to keep Nat’s strange behavior out of the spotlight as much as possible. Because Moose is not old enough, he cannot go into the hospital with Nat. She must go inside alone and ask the desk nurse for their father’s room number. Moose tells Nat that she will have to make eye contact with the nurse while she talks to her. At this point in Nat's life, all attempts to help her make eye contact have ended in frustration and failure. Moose is afraid his sister will not be able to hold herself together to talk to the nurse, but she does. Moose, as well as his mother and father, are impressed with what Nat achieved when given the task.

The investigation into the fire uncovers that the apartment caught fire because Donny, a man who lived nearby, set fire to it. Nat had nothing to do with it. When Moose tells his father he feels bad because he went to sleep the night of the fire, his father says that they never expected him to sit up all night with Nat. He adds that Moose should not feel responsible for everything that happens around him, especially the behavior of other people.

More summaries and resources for teaching or studying Al Capone Does My Homework.

Al Capone Does My Homework from BookRags. (c)2022 BookRags, Inc. All rights reserved.