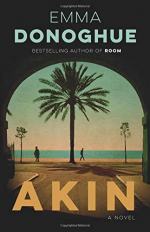 Emma Donoghue
This Study Guide consists of approximately 39 pages of chapter summaries, quotes, character analysis, themes, and more - everything you need to sharpen your knowledge of Akin.

This detailed literature summary also contains Quotes and a Free Quiz on Akin by Emma Donoghue.

The following version of this book was sued to create this study guide: Donoghue, Emma. Akin. New York: Little, Brown and Company, 2019. Hardcover.

The novel opens in February of 2018 in New York City. Noé “Noah” Selvaggio is a recently retired chemist living in an apartment in Manhattan. His wife, sister, and parents are all deceased. Noah will soon turn 80 years old, and he plans on taking a trip to the French city of Nice for his eightieth birthday. He was born in Nice, but when he was four years old, he fled from France with his father and sister. As Jews, they immigrated to the United States in order to escape the Nazi invasion during World War II. Noah’s mother, Margot, stayed behind to take care of her aging father, Pierre. She joined her family in 1944, after her father died of old age, and after the Nazis were pushed out of France by Allied forces.

Noah has not been back to Nice since he was four years old. However, just a few days before his trip, he learns that he has a grandnephew named Michael Young living in Brooklyn. Michael’s father, Victor, died of a drug overdose. Michael’s mother, Amber, is serving a prison sentence for drug possession, even though the drugs almost certainly did not belong to her. Michael’s most recent guardian, his maternal grandmother, recently died. Noah agrees to be Michael’s temporary guardian for a few weeks while the social worker searches for a more permanent living situation for Michael. Noah refuses to cancel his trip to Nice so his only option is to take Michael with him. Michael is 11 years old and has grown up in a somewhat dangerous low-income neighborhood in Brooklyn. He is often rude and foul-mouthed, and his main interests are video games and social media.

Noah and Michael board a plane from New York to France. Noah accepts Michael’s occasional rudeness with patience. Since the two of them are related by blood, Noah talks to Michael about Noah’s mother (Margot) and Noah’s grandfather (Pierre.) Pierre was a famous photographer who used the pseudonym Père Sonne. Michael shows only a slight interest in Pierre’s photographs. In Nice, they check into a hotel called the Hotel Excelsior. Noah once saw the hotel in a photo taken by his mother, Margot. When Noah and Michael learn that the hotel was used as a Nazi base during World War II, Noah suddenly begins to worry that Margot might have worked for the Nazis in the war.

They spend the next days touring Nice and occasionally researching possible leads that might reveal what Margot did in Nice during the war. Noah and Michael continue to experience some interpersonal friction, but they also begin to form a more meaningful familial bond. They eventually discover—with the help of a local researcher—that Margot worked as an agent and forger for the French Resistance. She helped the Resistance forge documents to help bring many children to safety. Noah also occasionally thinks about Michael’s parents and does some internet research. Noah concludes that Victor was likely forced by the police to be an informant. Noah also concludes that Victor was likely murdered by people who discovered that he was an informant. Noah decides to keep these theories to himself, as there is no way to prove them.

Before their trip ends, Noah and Michael manage to locate an elderly man named Lucien Demetz. During World War II, he was a child, and Margot helped to save him. As Noah and Michael prepare to return to the United States, Noah says that he would be willing to remain Michael’s guardian for the remainder of Amber’s prison sentence. Michael assents to the idea, as Michael and Noah have formed a fairly affectionate familial bond by this point. Noah is deeply gratified by Michael’s response, and they both appear to experience some personal renewal with the reintroduction of family into their lives.

More summaries and resources for teaching or studying Akin.