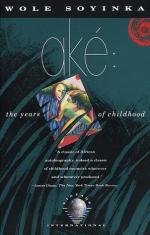 Wole Soyinka
This Study Guide consists of approximately 31 pages of chapter summaries, quotes, character analysis, themes, and more - everything you need to sharpen your knowledge of Aké.

Ak: The Years of Childhood Summary & Study Guide includes comprehensive information and analysis to help you understand the book. This study guide contains the following sections:

This detailed literature summary also contains Topics for Discussion and a Free Quiz on Ak: The Years of Childhood by Wole Soyinka.

Ake: The Years of Childhood is author Wole Soyinka's autobiographical account about events in his childhood between about 1934 and 1945 in the town of Ake in present-day Nigeria.

He begins his life in a parsonage compound. His father is Essay, Headmaster of the local equivalent of an elementary school, a man who delights in arguing. Wole's mother, called Wild Christian by most, is a strict disciplinarian, never failing to provide lashings for the slightest offenses.

Despite his toddler-aged stumbles (he gets knocked out playing see-saw, and nearly loses an eye to a grass-cutting scythe), Wole develops into a keenly curious and intelligent boy. His is a time of great transition, with traditional pagan spiritualism giving way to Christianity, and the local language of Yoruba becoming mixed with the English of Mother England. To many, the old ways still reign, with superstitions rampant, a world where gourds can be magical, amulets can make one invulnerable to harm, and forest creatures called ghommids live just beyond the nearby stream.

Wole navigates this world with a mixture of child-like ignorance (he once marches with a band to a distant town, getting completely lost), mischief (he cannot resist a taste of powdered milk, even at the promise of mother's lashings), and maturity, crying when his baby sister dies on her birthday.

Growing up is a sometimes difficult process for Wole. When he is old enough he is forced to move from his father's room to the crowded communal mat where the rest of the children sleep, where a child's random arm over his chest could translate to a nightmare in which Wole is attacked by a python. He also endures a tribal rite of passage, held down while an elder slices his wrists and ankles with intricate symbols. Young Wole must also suffer a scare from his father who nearly dies, and who Wole promises to get an education and go to college, the boy's ultimate goal.

Wole graduates to Grammar School, which is led by his uncle, the fierce and larger-than-life Daodu. Like Wild Christian, Daodu prefers to teach with punishment, though he rules his school like a court of law, where evidence is presented and witnesses are questioned for every accused offense.

Wole's mother eventually co-founds a women's union, dedicated to social issues and eventually an end to excessive taxation. In a rousing rally, the women storm the local governor's mansion demanding action, eventually staging a sit-in until their demands are met. The book ends with this protest at a standstill, and Wole leaving to interview for College.

More summaries and resources for teaching or studying Ak: The Years of Childhood.

Aké: The Years of Childhood from BookRags. (c)2022 BookRags, Inc. All rights reserved.