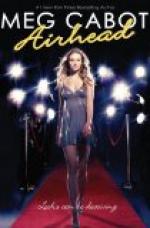 Meg Cabot
This Study Guide consists of approximately 26 pages of chapter summaries, quotes, character analysis, themes, and more - everything you need to sharpen your knowledge of Airhead #1: Airhead.

Emerson Watts is a not-so-normal 16 year old who attends Tribeca Alternative high School in New York. Emerson and her sister, Frida, are the daughters of professors. Em is a feminist, her sister is not. Em and her best friend, Christopher, like playing video games and making fun of the popular kids at school. Kids like Whitney Robertson, a member of what Em and Christopher refer to as the Walking Dead. Em's sister is into popular culture and fashion magazines. Em and Christopher take Frida to the opening of a Stark Megastore so she can see her current celebrity crush, British musician Gabriel Luna. As Frida fawns over the celebrities, Em and Christopher spend time making fun of them. Protesters called the ELF disrupt the store's opening, complaining that the megastore is forcing out local businesses. Their disruption causes a giant TV screen to crush Em; just as the face of Stark, model Nikki Howard, passes out.

Em wakes up to find that her brain has been transplanted into Nikki's body. Em has been declared dead, and she is now responsible for fulfilling Nikki's Stark contractual obligations. If Em doesn't do as she is told, her parents will be fined 2 million dollars and possibly brought up on criminal charges. Em goes home to Nikki's place and her roommate, Lulu, a celebrity's daughter who is not the brightest girl in town. Em finds herself stuck in a romantic triangle between Nikki's ex, Brandon Stark, and musician Gabriel Luna. Em tries to take Nikki's place, but can't forget her old life and Christopher. She arranges to attend her old school, hoping to be close to him again.

Em learns that Nikki's life isn't as easy and meaningless as she once thought. She also learns that Nikki wasn't a true friend to Lulu, who is an excellent friend to Em. Em desperately wants to make a connection with Christopher, especially after she realizes he is devastated by Em's death. The story ends with Em and Lulu going to spend time with Em's family. The book's subplots are left open for the next installment of the book.

More summaries and resources for teaching or studying Airhead #1: Airhead.

Airhead #1: Airhead from Gale. ©2005-2006 Thomson Gale, a part of the Thomson Corporation. All rights reserved.