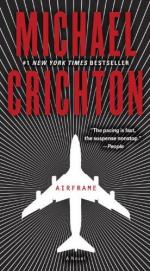 Michael Crichton
This Study Guide consists of approximately 64 pages of chapter summaries, quotes, character analysis, themes, and more - everything you need to sharpen your knowledge of Airframe.

Airframe by Michael Crichton is a suspense novel that will keep the reader guessing until the final pages. Once again, Crichton brings to life the issues that haunt Americans in their everyday lives, this time tackling air safety. Flight 545 has just landed with three dead and more than fifty injured passengers. Casey Singleton, Quality Assurance executive for Norton Aircraft, has one week to find out what happened to Flight 545 or lose a deal with China that would move her company into the black for the next two decades. Casey fights her own employees, reporters, and bosses to find the answers. Airframe is a fascinating defense of the aeronautic industry that will influence potential airline passengers for years to come.

A young couple is flying on TransPacific Flight 545 to Colorado with their small baby. The mother is a nervous flyer, but the flight is nearly over and she is beginning to relax. Suddenly the plane goes into a dive, sending her husband, video camera in hand, and flying through the cabin. The plane then begins to rise, screams filling the cabin. On the ground in Los Angeles, the pilot radios the tower and asks for forty ambulances. Word gets out, emergency personnel rush to the airport. Casey Singleton, an executive at Norton Aircraft, gets a call informing her of an important meeting scheduled earlier than expected. The aircraft involved in Flight 545 is a Norton N-22 airframe.

Casey is assigned to a group of engineers given the task of finding out what happened on Flight 545. This case is of particular importance to Norton Aircraft because it comes less than a week before the president is due to sign a large deal with China. The China deal will put Norton Aircraft in the black for the next two decades. If, however, word of the accident gets out and China believes it proves a safety issue against the N-22, the deal will not go through and Norton Aircraft could find itself in financial difficulty. Casey and her team have less than a week to prove the accident was not caused by a design flaw in the N-22.

To top off the pressure Casey is under to solve the mystery of Flight 545, she also has to take on a new assistant at the request of her boss, John Marder. This young man, Bob Richman, follows Casey around as she travels to LAX with her team to inspect the plane. On immediate inspection, the team knows that something catastrophic, bigger than turbulence, affected this plane. The damage tells a story in itself, showing the experienced investigators that passengers were thrown around the cabin like rag dolls. Richman is disgusted by the sight, but wonders why the investigators rule out turbulence so readily. Casey explains that there have been no cases of severe turbulence in years due to the use of computer navigation and weather radar technology.

The investigators search the plane for clues to the incident while Casey and Richman go to the hospital to interview a handful of survivors. One passenger tells Casey a story that sounds clearly as though the slats deployed mid-flight. The stewardess confirms this story when she tells Casey that the pilot told her there had been uncommanded slat deployment. This concerns Casey because there was a problem with uncommanded slat deployment four years ago when the N-22 first went into service. However, the engineers on her team prove to her satisfaction that this could not have occurred in this situation due to the fix Norton Aircraft designed for the N-22.

While Casey runs the investigation, collecting recorders and attempting to get information from them, a rumor spreads through the plant that the China deal will mean sending the wing to China. This deeply disturbs the workers because it will mean layoffs in the United States. The workers begin manufacturing a work slowdown by purposely allowing tools to break. Casey is warned several times to be careful because it is also possible the workers will attempt to scare her into backing off the investigation in hopes that news of the incident on Flight 545 will stop the China deal. Casey ignores these warnings, finding herself twice running from workers who appear to mean her harm.

At the same time, the press begins to get word of the accident. An ambitious television producer sees a video taken on board Flight 545 by a passenger and decides to design a news segment around the assumption that Norton Aircraft is responsible for the incident through poor airframe design. The producer, Jennifer Malone, finds several people willing to say that Norton knew the N-22 had problems with slat deployment and that they were irresponsible in allowing the airframe to remain in service. The report is sure to end the China deal if it airs. When Marder places Casey in a position where she is faced with either ruining the China deal or lying, Casey is forced to find a third option.