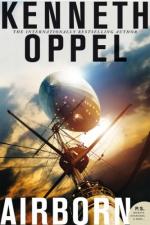 Kenneth Oppel
This Study Guide consists of approximately 53 pages of chapter summaries, quotes, character analysis, themes, and more - everything you need to sharpen your knowledge of Airborn.

Name of one of many airships, the Aurora is headed by Captain Walken. It sails about eight hundred feet above the Pacificus and has a crow's nest that is located one hundred and fifty feet above the Control Car, suspended from Aurora's belly. The Control Car has huge wraparound windows, but set back from the bow the way that it is, the visibility high and overhead is limited. As such, there is always someone on duty in the nest. Fully provisioned, she weighs a staggering two million pounds and is nine hundred feet from end to end - and is fourteen stories in height. Once filled with hydrium, however, it takes only two men to move her out of the hanger.

Name of the ocean we know as the Pacific.

Suspended one hundred and fifty feet below the Aurora's belly.

More summaries and resources for teaching or studying Airborn.