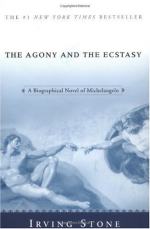 The Agony and the Ecstasy Summary & Study Guide

The Agony and the Ecstasy Summary & Study Guide Description

The Agony and the Ecstasy Summary & Study Guide includes comprehensive information and analysis to help you understand the book. This study guide contains the following sections:

This detailed literature summary also contains Topics for Discussion on The Agony and the Ecstasy by Irving Stone.

“The Agony and the Ecstasy” is a sweeping biographical novel of Renaissance Florentine artist Michelangelo, and an overview of the turbulent times in which he lived. The novel presents the story of the rivalry of Italian city-states, the political infighting in and around the Catholic Church, and the struggle surrounding religious reform as the Church responds to the rise of the philosophy of humanism. On another level, the novel tells the story of a Florentine family, the Buonarrotis, as they struggle to regain their past social and economic standing in a changing world. The final level of the novel is the story of one remarkable man, Michelangelo Buonarroti, and how he copes with the pressures from family, from society, and from within himself—giving birth to some of the most lasting artistic expressions ever created.

Against his father’s wishes, Michelangelo assumes an apprenticeship with Ghirlandaio, where he learns the mechanics of producing frescoes. Michelangelo is a very skillful draftsman, drawing with ease and power, but he feels he has no eye for color and painting. Still, he learns the craft of painting. Even early on, Michelangelo emphasizes the beauty of the human body in his art. As opposed to his contemporaries, Michelangelo presents the human form outlined by the clothing of his subjects, rather than using robes to obliterate all sense of the body beneath. The human form is something to be glorified, not condemned.

Michelangelo’s ability is recognized early by Lorenzo de Medici, the citizen-leader of Florence and the richest man in Europe. Lorenzo is a patron of learning and of the arts, and guides Michelangelo’s development, both directly and by example. Under the patronage of Lorenzo—called Il Magnifico—Michelangelo studies the carving of marble.

Even his first full theme, a Madonna and child, is recognized as a unique fusion of the classical Greek with the spiritual Christian. Michelangelo portrays Mary as she is torn between acceding to her duty to God or protecting her child from harm.

Lorenzo de Medici dies. Not only does Michelangelo lose a benefactor, but also a friend and mentor. He leaves the castle and falls into a funk, emerging only when he conceives the idea of carving a Hercules—a sculpture that will represent the moral and intellectual strength of Lorenzo while also capturing the physical strength of Hercules. But to carve it accurately, he needs knowledge of what lies beneath the skin of the human body. He secretly dissects dead bodies until Ghirlandaio dies and Michelangelo decides he’s seen enough of death.

Lorenzo’s son and new leader of Florence, Piero, invites Michelangelo back to the castle where he had lived under Lorenzo’s patronage. Michelangelo completes and sells the Hercules. Piero’s high-handed style of governance is not sitting well with the people of Florence, and they storm the castle. Piero has already fled, and Michelangelo stands in front of the crowds, trying to protect the works of art, but there is little he can do. He flees to Bologna. He spends a year there, and returns to find Florence in even more turmoil as the radical Friar Savonarola preaches that all art is lustful vanity, and must be destroyed. When Michelangelo receives an offer from Cardinal Riario to move to Rome, he does.

In Rome, the Cardinal proves himself unable to decide on what he would like Michelangelo to carve. Without money, without work, Michelangelo finally gets released from the Cardinal after a year of waiting. He carves a small cupid and a large Bacchus, both for his new friend and patron, Jacopo Galli. He also gets the commission for a statue for Saint Peter’s. He sculpts a pietá, but the Cardinal who commissioned it dies before it can be installed. Rather than seek permission from Pope Alexander VI, “The Borgia,” the enemy of all things Florentine, Michelangelo installs it discreetly at night. Days later, he overhears viewers ruminating over who might have sculpted it. They dismiss Michelangelo as a possibility, so he returns at night and carves his name into a strap across the Madonna’s breast. Michelangelo heads back to Florence to compete for the right to carve the huge marble block called “Il Duccio.”

Michelangelo wins the competition and carves a giant statue of a lithe and strong David, as he faces Goliath before they battle. The statue wins universal acclaim, and Michelangelo works several other commissions, but then the new Pope, Julius, requests his presence in Rome. Julius wants a tomb, and Michelangelo proposes a grand vision with forty statues. Pope Julius likes the idea, but he signs no contract and drags his feet—apparently convinced working on the tomb will hasten the day he needs it. Michelangelo tires of the Pope’s stalling, and leaves Rome. The Pope requests his return, but he resists for many months, finally acceding. But the Pope wants him not to carve marble, but to paint a ceiling: the Sistine Chapel.

Michelangelo paints a grand vision, and is rewarded by a payment and the right to finally begin carving the marble statues for the tomb. Pope Julius dies and Cardinal Giovanni—a Medici—becomes Pope Leo X. Pope Leo does not want Michelangelo to carve anything for his political enemies, Pope Julius’s family, so Leo sends Michelangelo to get marble for a new facade for the Medici chapel in Florence. Years of delay and political turmoil result in the cancellation of plans for the facade. Michelangelo starts carving more statues for Julius’s tomb, this time in his Florentine studio. Pope Leo likes that no better, and commissions a chapel for his father and his uncle. War between Florence and the papal forces delay the work, but it is finally done. It is done in a Florence now is under tyrannical control and holds nothing for Michelangelo.

He leaves for Rome. Amidst struggles with various Popes and coping with the pressure as political tides change, Michelangelo paints a Last Judgment scene on the wall of the Sistine Chapel, two walls of the Pauline Chapel, and—as official architect of the Vatican—designs St. Peter’s Cathedral.

He dies, leaving a legacy of beauty behind him.

The Agony and the Ecstasy from BookRags. (c)2022 BookRags, Inc. All rights reserved.