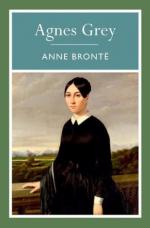 Anne Brontë
This Study Guide consists of approximately 45 pages of chapter summaries, quotes, character analysis, themes, and more - everything you need to sharpen your knowledge of Agnes Grey.

In her novel, Agnes Grey, Anne Bronte tells the story of a young woman who takes on a job as a governess in order to help her family. Believing that she will be a capable teacher, Agnes embraces the idea of her job, but soon learns the task is not as easy as she once thought. Difficult students and pampering parents combine to make her job almost impossible. Agnes perseveres, though, and soon finds the life that she has prayed to have.

Agnes is the daughter of a clergyman. Her mother was born to a rich family that disinherited her when she decided to marry a man with no wealth. She schools her daughters at home, keeping them away from the realities of life. When Agnes' father loses what little saving he had when the man whom he sends to invest his money is killed at sea, Agnes decides to help the family out by becoming a governess.

In her first job, Agnes is in charge of children who are unmanageable. The boy hits, kicks and bosses Agnes around. He and his sister refuse to learn even the simplest tasks. The parents will not allow Agnes to punish the children for their misbehavior. Near the end of her time with this family, Agnes kills a nest of baby birds in order to keep the boy from torturing the birds as he had wanted. Soon after this incident, Agnes is told her services will no longer be needed. Mrs. Bloomfield sites the children's bad behavior and their lack of learning as reasons for Agnes' dismissal.

In her next job, Agnes is in charge of two older girls who are not much more cooperative about learning than her first charges. Agnes attention is focused mainly on one of the girls, Rosalie Murray, who reaches the age at which she is introduced to society, entertains suitors and marries, while she is under Agnes' instruction. Although Agnes tries to rein in this girl's flirtatious manner, she has little affect on her. Rosalie flirts with men to the point she makes them believe she is interested in marrying them, and then turns them down, delighted that she is able to crush them. Agnes finds her manner of courting not only unbecoming, but also unnatural.

During this time Agnes meets Mr. Weston, the new curate at the church that she attends. She develops an admiration for Mr. Weston's religious and serious nature. Sensing this admiration, Rosalie takes it upon herself to woo Mr. Weston with her charms. Rosalie is never successful in winning Mr. Weston's heart even though she puts Agnes to much dismay as a result of her behavior and the lies that she tells Mr. Weston concerning Agnes. Agnes is forced to return home suddenly when her father passes away and she chooses to help her mother start a school instead of returning to the Murrays.

Agnes hopes to see Mr. Weston again when she returns to visit Rosalie in her new home. She learns, however, that he has moved to a different church. Agnes busies herself in helping her mother start her school. One day while walking on the beach, Agnes is surprised when a dog that had been her pet at the Murray home runs up to meet her. She is surprised again when she discovers this dog is accompanied by Mr. Weston, who has been searching for her. Mr. Weston later asks Agnes to marry him and she accepts his proposal.

More summaries and resources for teaching or studying Agnes Grey.