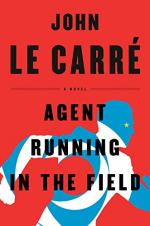 John le Carré
This Study Guide consists of approximately 41 pages of chapter summaries, quotes, character analysis, themes, and more - everything you need to sharpen your knowledge of Agent Running in the Field.

Agent Running in the Field Summary & Study Guide includes comprehensive information and analysis to help you understand the book. This study guide contains the following sections:

This detailed literature summary also contains Quotes and a Free Quiz on Agent Running in the Field by John le Carré.

The following version of this book was used to create the guide: Le Carré, John. Agent Running in the Field. Viking, 2019.

Nat is a 47-year-old spy for the British Secret Service who is the reigning champ of his badminton club. At the club, Ed approaches Nat and introduces himself. He asks if Nat will play him in badminton as he heard he’s club champion. They decide to play three weeks from now.

Nat has been stationed abroad in Eastern Europe on and off his whole career and is now back in England to retire. He meets with HR who tells him there is one position available for him within the London General department. Nat meets with Dom Trench, director of London General. Dom tells him the position is managing the Haven, a substation of London general that is not respected. Nat think the position is beneath him, but accepts thinking it may lead to a promotion to the Russia department.

Nat tells his wife, Prue, on a family ski trip with their 19-year-old daughter Steff. Prue is supportive of him. Nat tells Steff his true occupation, having lied to her about being a diplomat her whole life. She questions the morality of his job. She is angry with Prue for keeping the secret from her.

Nat begins working at the Haven. His number two is Florence, a young and very talented spy, only not yet promoted due to her temper. They begin working on operation Rosebud, which aims to break into and install surveillance into a townhouse belonging to Orson, a Ukrainian Oligarch based in London.

Nat plays badminton with Ed, who plays very gracefully and impresses Nat. They get a drink after the game. After their second game, Ed tells Nat his political views (anti-Brexit and anti-Trump) and asks if Nat agrees with him. Nat agrees in weaker language and Ed says their friendship can continue. They begin playing weekly and always getting a drink after, in which Ed rants about politics. Ed greatly admires Germany, who he thinks is a great embodiment of European politics.

Nat and Florence present operation Rosebud to the head office, who approve. Now, they only need the treasury board’s approval before they can begin. Florence and Nat go for dinner to celebrate. Ed asks Nat to play doubles badminton with Laura, Ed’s little sister. Nat says yes and asks Florence to be his partner.

Nat goes to a NATO meeting out of town at Dom’s request. In the evening, Nat goes to the doubles badminton game. He suggests a cover story to Florence for how he and Florence know each other at the game, but she snaps at him saying she doesn’t want to lie anymore. Ed suggests they all go for dinner, but Nat is called to see an agent out of town.

Nat meets with the agent, Sergei, who has received communication from Moscow to rent an apartment in London for the summer. Sergei believes the letter was from Anastasia, his spy tutor in Russia.

Back at the Haven, Nat finds out Florence has resigned and Rosebud was rejected by the treasury board. He asks Dom why Florence quit, and Dom says she was too emotional, which is also why operation was rejected.

Steff comes home engaged to a graduate student and is no longer upset with Prue and Nat.

Nat goes to Karlovy Vary to meet with Arkady, a former agent. Nat has had a realization about Anastasia and thinks Arkady can confirm it. Arkday confirms that Anastasia is his past love, who told him that she is in contact with a British agent: someone who works for the service.

Nat gets dinner with Florence who tells him she realized that Dom’s wife worked as a wealth manager for Orson and also sat on the treasury board which rejected Rosebud. She confronted Dom about this, who denied any impartiality by his wife. She quit in anger.

Anastasia comes to London and Sergei facilitates a meeting with the double agent who is revealed to be Ed. She thanks Ed for his information and apologizes they had to say no at first for protocol. Ed works as a clerical agent in a sister service of Nat’s.

Nat is shocked and tells the directors Ed is his badminton partner. They question him all night, and Nat is unable to stay calm. He is taken off the mission as they think him and Ed are colluding.

Nat goes home to wait for further instruction. He is invited to Bryn Jordan’s house, the director of Russia whom Nat knows well. Bryn tells Nat to recruit Ed as a double agent so he does not have to go to prison. Nat says yes, having realized he thinks Ed made a mistake. Nat returns home and tells Prue everything.

Nat meets with Renate, an ex-lover who works for the German embassy. She confirms what Nat realized: that Ed meant to share top secret information with Germany, but was rejected by them as they did not want to ruin their relationship with Britain. Russia, then approached him pretending to be Germany, saying they only said no the first time due to protocol. Nat asks what the information was. Renate says it was operation Jericho, a plan for the U.K. to use double agents to take down the E.U. for the U.S.’s benefit.

Nat plays badminton with Ed, who tells him he is engaged to Florence and asks Nat to be his best man at their courthouse wedding. He says they should go for dinner the three of them after the game. Nat goes and then invites them over for drinks. At his house, he writes a letter telling Florence about Ed’s situation and puts it in her jacket.

Nat and Prue come up with a plan to save Ed. Nat tells Bryn he will recruit Ed through Florence. Nat meets with Florence in a restaurant he knows is bugged by the Service. By the noisy bar, he tells her to book a honeymoon in Torquay and slips her paper with an address. At a table, they act as if Nat is telling Florence about Ed for the first time and she agrees she will get Ed to be a double agent, but that she refuses to tell him until after they marry and honeymoon.

Prue and Nat go to the courthouse for Florence and Ed’s wedding. After the wedding, Prue offers them a ride. They drive to the airport, telling Ed everything and that Prue has booked them flights as they are going to a remote guest-house in the Transylvanian Alps run by Nat’s former clients. Ed is shocked and does not say goodbye to Nat at the airport.

More summaries and resources for teaching or studying Agent Running in the Field.

Agent Running in the Field from BookRags. (c)2022 BookRags, Inc. All rights reserved.