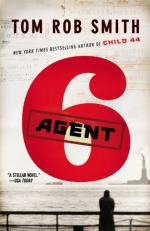 Tom Rob Smith
This Study Guide consists of approximately 73 pages of chapter summaries, quotes, character analysis, themes, and more - everything you need to sharpen your knowledge of Agent 6.

The people who seem innocent are often those we should watch the most carefully.
-- Leo Demidov (USSR, Moscow, The Lubyanka, Lubyanka Square, Headquarters of the Secret Police, January 21, 1950 paragraph 39)

Importance: In a display of Leo’s original MGB mindset, and his extreme devotion to the State, Leo lectures a student, Grigori, about the appearance of innocence. In typical Communist paranoia and barbarity, Leo explains that the innocent are the ones who should be most closely watched, for the feigning of innocence is a cover for counterrevolutionary activity. This is indicative not only of the brutality of the State, but how it manages to force false confessions out of people, by finding reasons why people are not innocent, even if they are not actually guilty.

The teams’ role was to ensure that Austin was shown a projected vision of Communist society, a representation of its potential, rather than the reality of that society as it now stood.
-- Narrator (House on the Embankment, 2 Serafimovich Street, Next Day paragraph 2)

More summaries and resources for teaching or studying Agent 6.