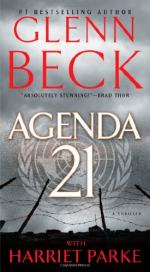 This detailed literature summary also contains Quotes and a Free Quiz on Agenda 21 by Glenn Beck.

Agenda 21, a novel written by Glenn Beck and Harriet Parke, highlights the most extreme results that might occur if the United Nations followed through with the real Agenda 21 document. Preceding Chapter 1, Beck includes a portion of the real Agenda 21 to inform the reader of the gist of its meaning Then, the novel continues into the tale of Emmeline, a 17 year old girl.

Much of the story is told through flashbacks at the beginning to establish backstory of how the Republic came to power. People are relocated, and the promises the Republic originally produce are to treat everyone equally. The Republic becomes a very power hungry government institution focused solely on reproduction and perfection.

Emmeline can reproduce, which is not typical for most of the women. As soon as she begins her period, she is immediately paired with George, an old friend of the family. Emmeline becomes pregnant; but, as her family is trying to stage a plan for her to escape, Father and George are killed. She has the baby, and Mother falls into a deep depression.

Overall, Emmeline loses her mother, father, and two of the men with whom she is paired. She doesn’t know much about the Republic and how they work. She must figure out how this new world works without the guidance of her mother and father.

Mother leaves Emmeline many things hidden in her sleeping mat. Emmeline discovers a Bible, a map, a book, matches, a knife, a coin, recipes, and a picture This helps shape her own history, and she tries to figure out why her mother leaves these items.

After Emmeline has Elsa, she meets John who is responsible for the babies. She wants to see Elsa constantly, and she collaborates with John on how to make that happen. She meets John's own son, David. David, a night Gatekeeper, visits Emmeline often; and they end up falling in love. Although night Gatekeepers are not supposed to be paired because they aren’t home at night, the Authorities pair David and Emmeline. Emmeline is then given the night shift caretaker position at the Children’s Village with David’s mother, Joan, being her supervisor.

In this position, Emmeline can see Elsa every night. Emmeline meets Lizzie and, eventually. finds out that the Children’s Village will be relocated since kids are not thriving. Emmeline decides to do something about it, especially since there are rumors of the people who live in the wild, known as the shadow people, stealing the food from the citizens. Emmeline eventually grabs Elsa and another child, a boy, whom she meets while working. She asks David to leave with her. Although he's hesitant, he agrees. They gather all the things in Mother’s mat to take with them and use the matches to create a fire. The diversion allows them to escape the compound through a hole in the fence, which is where the book ends. As they head to freedom, the Republic burns behind them.