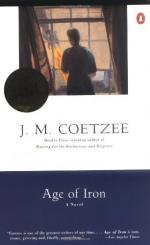 In the form of a long letter, an aged woman who has been diagnosed with terminal cancer tells her thoughts about the apartheid system that have bothered her all of her life. Though the woman is white and has not faced the inequalities first-hand, during the time she writes this letter, she makes some new contacts that allow her to become a witness to the reality of South Africa in the mid 1980s.

The narrator reveals that she is a...