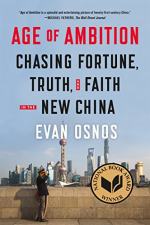 Age of Ambition: Chasing Fortune, Truth, and Faith in the New China Summary & Study Guide includes comprehensive information and analysis to help you understand the book. This study guide contains the following sections:

This detailed literature summary also contains Topics for Discussion on Age of Ambition: Chasing Fortune, Truth, and Faith in the New China by Evan Osnos.

Age of Ambition: Chasing Fortune, Truth, and Faith in the New China by Evan Osnos is a depiction of current Chinese society and the changes it is undergoing following the country’s rapid economic growth. The book describes several individuals and events that the author encountered while living in China between 2005 and 2013. The narrative is largely driven by the experiences and the opinions of Chinese citizens, but also advances several of Osnos’s personal arguments.

Broadly, the book’s individuals fall into four categories, the first being dissidents who strongly oppose the Chinese Communist Party (CCP) and its policies. Here, Osnos describes Chen Guangcheng, a masseur-turned-lawyer who drew the ire of authorities for helping people challenge laws and government corruption in court. Chen was imprisoned and placed under house arrest, before escaping to seek asylum in the United States. Ai Weiwei, a popular Chinese artist, is a second major dissident described in this book. Ai began criticizing the government via Twitter following its flawed response to a major earthquake. Ai was also imprisoned, placed under house arrest, and severely beaten by Chinese police. In addition to these two, the book describes several other protests and dissidents in less detail.

The second category is media figures who, while critical of the Chinese government, limited their criticism to non-controversial topics. The first of these is Hu Shuli, a magazine editor. Hu controlled Caijing magazine, which became popular among party elites for its economic commentary. Hu constantly challenged the limits of government censorship and eventually started her own magazine after a dispute with Caijing’s owners. Second, the author portrays Han Han a racecar driver and author. Although he published his commentary through a blog, Han Han was similar to Hu in that he limited his criticism to low-level topics like the education system.

The third category is strong supporters of the Chinese government and the CCP. One of the first individuals Osnos introduces is Lin Zhengyi, later known as Lin Yifu, who defected from the Taiwanese military to swim to mainland China. He eventually became the chief economist of the World Bank and strongly promoted the Chinese economic model throughout his career. More extreme in his nationalist views was Tang Jie, a young scholar who made several videos denouncing outside media coverage of China and arguing forcefully that China was reclaiming its rightful role as a global leader.

Finally, Osnos portrays Michael, a young man who was interested in learning English and eventually becoming an English teacher. Michael struggled to be successful throughout his life and is emblematic and the many young Chinese who are frustrated with their lack of economic prospects. Through all of these characters, Osnos argues that while China has achieved impressive growth, corruption, economic inequality, and a lack of a unifying ideology are major threats to the country.