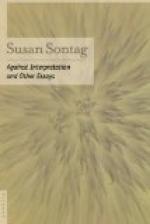 Important People in Against Interpretation

This Study Guide consists of approximately 36 pages of chapter summaries, quotes, character analysis, themes, and more - everything you need to sharpen your knowledge of Against Interpretation.

Susan Sontag was an American writer, cultural critic, essayist, and lecturer. She was born in New York, NY in 1933. She studied ancient history, philosophy, and literature at the Universities of California and Chicago and contributed both fiction nonfiction pieces to a variety of magazines and periodicals throughout her career, including the Chicago Review, The Atlantic, The New Yorker, The New York Review of Books, and the Times Literary Supplement. She wrote extensively in the areas of literary and cultural criticism as well as political and social commentary. She died in New York, NY in 2004 at the age of 71 following complications related to leukemia.

Simone Weil was a French thinker and a Christian mystic. She was born in Paris, France in 1909 to Jewish parents. She studied Western Philosophy at École Normale Supérieure in Paris, earning a graduate degree in 1931 with a thesis...

More summaries and resources for teaching or studying Against Interpretation.

Against Interpretation from BookRags. (c)2022 BookRags, Inc. All rights reserved.