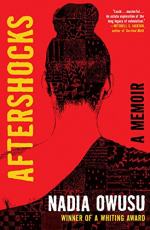 Nadia Owusu
This Study Guide consists of approximately 35 pages of chapter summaries, quotes, character analysis, themes, and more - everything you need to sharpen your knowledge of Aftershocks.

The following version of this book was used to create the guide: Owusu, Nadia. Aftershocks. Simon & Schuster, 2021.

In her memoir, Aftershocks, Nadia Owusu tells the first person account of her quest for truth, meaning, and purpose. The memoir employs a fragmented structure that shifts between scenes from Nadia's distant and recent past. The following summary follows a linear model.

Nadia was born in Dar es Salaam to her Ghanian father, Osei, and her Armenian mother, Almas. Shortly after her sister, Yasmeen, was born, Almas abandoned the family, and moved to Massachusetts to start a new family with a new husband. Throughout Nadia's childhood, she longed for her mother. When she was seven, Almas returned, spent the day with her daughters, and disappeared once more. Her mother's failure to fulfill a proper maternal role in Nadia's life made her reliant upon her father. However, when Nadia was five, Osei had gotten remarried to a woman named Anabel. Nadia did not like Anabel from the start, viewing her as competition for her father's love and attention. Anabel seemed to regard Nadia similarly, and the two had a tumultuous relationship throughout Nadia's childhood.

Over the years, Nadia's family moved often between cities and countries for her father's job with the UN. Eventually Osei began worrying that their repeated relocations were upsetting his daughters' education. Nadia began attending a Catholic boarding school in Surrey, England, called St. Mary's. While there, she ignored the only other black girl in her class, desperate to be accepted by the popular white girls. In retrospect, she understands that her behaviors were both cruel, and a survival mechanism.

Nadia and Yasmeen moved back with their family when Osei was diagnosed with cancer. As his condition worsened, the girls feared what would happen to them if they lost their father. After his death, Almas declared she would not be coming to the funeral, nor would she assume any new role in her daughters' life. She had a new family. Anabel claimed Osei's daughters as her own, and raised them along with her son, Kwame. Tensions between Nadia and Anabel worsened. However, they also relied upon one another.

When Nadia turned 18, she moved to New York City to attend Pace University. Her new American environment did not afford her the sense of belonging she desired. Her inheritance money soon ran out, and she struggled to pay for school and support herself. Despite these difficulties, she never gave up, and remained in the city.

Ten years later, during a trip to New York to visit Kwame, Anabel reconnected with Nadia. During dinner they fought about inconsequential things. Trying to hurt Nadia, Anabel told her stepdaughter that her father had really died of AIDS, not cancer. Though Nadia called her a liar and stormed out, she could not help wondering if Anabel was telling the truth. The next day she wandered the city. She no longer knew who her father was. She no longer understood herself.

After finding a blue chair on the sidewalk that reminded her of her father, Nadia dragged it into her apartment. She took up residence in the chair for an entire week. During her time in the chair, she traveled into her memories in order to search for answers about her family and heritage. Once she finally left the chair, she was able to see her world and herself anew.

More summaries and resources for teaching or studying Aftershocks.