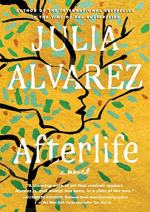 Related Topics
Before We Were Free
How the Garcia Girls Lost Their Accents
In the Name of Salome
In the Time of the Butterflies
Julia lvarez
Yo!
Afterlife

Julia Álvarez
This Study Guide consists of approximately 35 pages of chapter summaries, quotes, character analysis, themes, and more - everything you need to sharpen your knowledge of Afterlife.

Vermont is a primary setting in the novel. Antonia has lived in Vermont for years, and she has a keen awareness of sociopolitical dynamics in the state. Specifically, she is aware that there are many undocumented immigrants in the state, and that those immigrants are actually vital to the state’s economy. Unfortunately, there is much xenophobia among the residents of Vermont. Roger is a partial manifestation of these dynamics, for although he approves of harsh immigration laws, he also employs undocumented immigrants so that he can save money by paying them below minimum wage.

Antonia’s house is located in a neighborhood near the Vermont city of Burlington. She used to live there with her husband, Sam, but Sam recently died of an aortic aneurysm. Antonia and Sam never had children, and Antonia’s parents are deceased, so her only immediate family members are...

More summaries and resources for teaching or studying Afterlife (Alvarez).