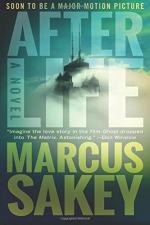 Marcus Sakey
This Study Guide consists of approximately 38 pages of chapter summaries, quotes, character analysis, themes, and more - everything you need to sharpen your knowledge of Afterlife.

This detailed literature summary also contains Quotes and a Free Quiz on Afterlife: A Novel by Marcus Sakey.

The following version of this book was used to create the guide: Sakey, Marcus. Afterlife. Thomas & Mercer, 2017.

The novel Afterlife opens in 1532 following Edmund, a young boy who turns to cannibalism when he is stranded on a shipwreck. Once he dies, Edmund becomes an Eater in the echo world, someone who consumes the souls of others in order to continue living in the echo world. In the present day in Chicago, FBI agent Will Brody comes across the body of Emily Watkins, recently gunned down by a mysterious sniper. Fellow FBI agent Claire McCoy is also on the case and is Brody's boss and new love interest. They discuss the case and their future and Brody admits that he is willing to quit the FBI to be with her.

After killing Emily Watkins, Simon Tucks the sniper, almost kills himself after realizing what he has done but is stopped by a voice. He calls this voice his True Self and follows what it tells him to do. Little does Simon know that this is actually Edmund, who has lived for centuries by feeding off the souls of others and now has found a way to live off other people's fears.

Brody and Claire investigate a lead on the West Side of Chicago and Brody dies when a bomb goes off. At first he thinks that he is still in the world of the living, until a group attacks him. Brody narrowly escapes, killing one of them. After her death, Brody lives Raquel's life through her memories. Meanwhile, Claire is shocked and saddened by Brody's death and angry that she did not realize it was a trap.

Brody explores the echo world and meets a group that explains that Raquel and the rest of her group are Eaters. The group - Kyle, Antoine, and Lucy - tell Brody that he became an Eater by accident, when he killed Raquel in self-defense. Kyle tries to comfort Brody about his death and takes him to the group's home at the Langham Hotel. He teaches him about Eaters and how things work in the echo world.

Brody meets the Professor, or Arthur Johnson, and a former motorcycle club member and drug dealer Sonny; they explain that the echo only contains people who died suddenly or violently, and that anything requiring energy does not work here - like guns. Brody is distraught by what they tell him and runs out into the city. Both he and Claire cry, worlds apart.

He eventually returns to the hotel and Kyle tells Brody there are two rules here at the hotel: pull your weight and do not eat people, rules made by the creator of the safe zone Raylene a few years ago. Meanwhile, Claire has a dream and decides to go after the sniper alone. Brody also has a dream and realizes what Claire is doing. He follows her and is there to help her after Simon detonates a bomb in his apartment that kills Claire - after she shoots him dead. Claire and Simon fight but Brody and Kyle's group save her.

Brody fills Claire in on everything and they decide to go after Simon. A few days pass and they both adapt to their new lives in the echo world. On one of their patrols, the group finds a huge crowd of Eaters in a university tower. Simon is their leader and he throws a helpless woman into the fire. He calls them to band together and target anyone not with them. Back at the hotel, Brody and Claire convince everyone that the only way to stay safe is to kill Simon.

They manage to kill a group of Eaters but then another wave of Eaters descends and Simon appears. Simon kills Sonny and Claire. Brody accidentally rips a necklace off Simon that reduces him to a sputtering mess, and Brody kills Simon. He lives through Simon's memories and suddenly finds himself back in the world of the living. The police arrest him and have a hard time believing that Brody is who he says he is since he is supposed to be dead.

He is suddenly released and a limo takes him to Isabella - who was once a partner of Edmund's who now wants to kill him. Like Edmund, Isabella is centuries old and wants the necklace Brody has in exchange for bringing Claire back. Brody rejects her offer and then commits suicide in order to find Claire in the echo world again. He travels through this world and through the layers of other ones until he reached the world of the dead, where he manages to find Claire among the hordes of people. Brody uses the necklace and his will to get back to the echo world and they return to the hotel where they plan how to kill Edmund.

Brody shows Claire how to move through worlds and they travel through the memories in the necklace. They reach the final memory in the necklace of Edmund on the ship Persephone, when he was still a human turning to cannibalism. They realize that this memory actually is Edmund and that they can destroy him here. Edmund attacks them, trying to stop them. He sends a lightning strike down to kill Brody but Claire jumps in front.

Claire and Brody are thrust into another world, the life they might have had. Edmund offers them this life in exchange for the necklace. Instead Brody breaks the necklace with a bat, killing Edmund and the world they are in.

In the last chapter, a young boy wants to build a treehouse in his backyard, and meets a new neighbor named Claire, about 10 years after the action of the novel. It is hinted at that these are Brody and Claire, reborn after they killed Edmund.

More summaries and resources for teaching or studying Afterlife: A Novel.