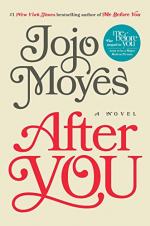 Get After You from Amazon.com
View the Study Pack
Study Guide
Order our After You Study Guide

After You Summary & Study Guide

Jojo Moyes
This Study Guide consists of approximately 38 pages of chapter summaries, quotes, character analysis, themes, and more - everything you need to sharpen your knowledge of After You.

After You Summary & Study Guide Description

After You Summary & Study Guide includes comprehensive information and analysis to help you understand the book. This study guide contains the following sections:

This detailed literature summary also contains Quotes and a Free Quiz on After You by Jojo Moyes.

The following version of this novel was used to create this study guide: Moyes, Jojo. After You. London: Penguin, 2015. Kindle AZW file.

After You picks up soon after Me Before You ended. After You opens with the protagonist, Louisa Clark, working in an airport in London. In the time since Will Traynor’s suicide, she has bought a flat with her inheritance money from Will but has been stuck in an unfulfilling job at an Irish-themed bar.

One night after work, Louisa drinks a lot of wine and climbs up onto her apartment building’s roof, while thinking about her grief over Will’s death. She is startled by a girl’s voice causing her to stumble and fall two stories down her building. Paramedics take Louisa to the hospital and her family comes to visit her. When she is discharged from the hospital, Louisa returns to her hometown of Stortfold to live with her family. Once she is feeling better she decides to move back to London and her family agrees on the condition that she attends grief counseling sessions.

After a counseling session at the Moving On Circle, Louisa bumps into Sam, one of the paramedics who saved her life after she fell from the roof, and they start dating. Sam is there to pick up his nephew Jake, but both Louisa and the reader mistakenly assume that Sam is Jake’s father. In the counseling sessions, Jake speaks about his father engaging in a series of casual sexual affairs as a result of his grief over Jake’s mother’s death. This leads Louisa to mistakenly think of Sam as a womanizer.

One night at her flat, Louisa is visited by a teenage girl named Lily Houghton-Miller who claims to be Will Traynor’s daughter. Louisa visits Lily’s family and discovers that her mother, Tanya, never told Will that he had a daughter. After seeing how selfish and unkind Lily’s mother is, Louisa invites Lily to stay with her for a while. Louisa makes attempts to introduce Lily to Will’s family while Lily’s behavior becomes increasingly erratic. Lily arrives drunk in the middle of the night, borrows items of clothing with sentimental value from Louisa without asking, and invites strangers back to the flat for a party without Louisa’s permission. When Louisa discovers that her grandmother’s jewelry has been stolen, she kicks Lily out of the flat.

Meanwhile, Louisa confronts Sam about his womanizing behavior and discovers that he is Jake’s uncle, not the man who Jake talks about in the counseling sessions. After this misunderstanding is cleared up, their relationship becomes more serious and Louisa worries that she is betraying Will. Louisa discovers that Lily has planted a garden for her on the roof of the building. Feeling guilty about their argument, Louisa visits Lily’s family home in order to apologize, only to discover that Lily has gone missing.

In a chapter told from Lily’s perspective, the reader discovers the explanation for Lily’s erratic behavior: Lily is being blackmailed over a sexually explicit photograph. With Sam’s help, Louisa finds Lily and she explains about the blackmail. Sam and Louisa help Lily by threatening the man who is blackmailing her and destroying the phone that has the only copy of the photograph on it. Louisa is offered a job in New York but she turns it down in order to take care of Lily. Shortly afterwards, Will’s mother, Mrs. Traynor, enrolls Lily in a new boarding school and Lily moves out of Louisa’s flat.

Sam is shot in a gang-related incident in London and the prospect of his death makes Louisa realize how much she loves him. She is offered another job in New York that she plans to turn down in order to be with Sam, but Sam tells her that she has to take the job and that they can be in a long-distance relationship. In the final chapter, Louisa catches a flight to New York to begin her new life.

More summaries and resources for teaching or studying After You.

After You from BookRags. (c)2022 BookRags, Inc. All rights reserved.