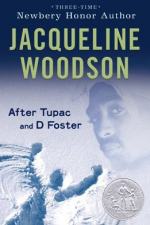 Jacqueline Woodson
This Study Guide consists of approximately 29 pages of chapter summaries, quotes, character analysis, themes, and more - everything you need to sharpen your knowledge of After Tupac and D Foster.

After Tupac and D Foster Summary & Study Guide includes comprehensive information and analysis to help you understand the book. This study guide contains the following sections:

This detailed literature summary also contains Topics for Discussion and a Free Quiz on After Tupac and D Foster by Jacqueline Woodson.

After Tupac and D Foster takes place during the mid 1990s when two eleven-year-old girls from Queens meet an enigmatic girl named D Foster. The story is set against the backdrop of real-life rapper Tupac Shakur's legal troubles and eventual fatal shooting.

Two African-American girls, Neeka and the unnamed narrator, have known each other since they were babies. They are eleven years old and live in Queens, New York. One day, another girl named D arrives on their block. With strange clothes and a multi-racial look, D is surprising to the girls. They soon strike up a lasting friendship. All three girls love the music of rapper Tupac Shakur. They feel Tupac sings as if he knows them and their struggles personally.

Neeka has a large family, headed by her mother, Miss Irene. Her oldest brother, Tash, is an effeminate homosexual who is in jail for a homophobic hate crime he didn't commit. Her older brother Jayjones works at KFC and aspires to be a professional basketball player. The narrator's own family is small, just her and her mother, and so she often does things with Neeka and her family. Neeka and the narrator are on a tight leash and are unable to leave their neighborhood, while D seemingly roams anywhere in the city she wants to, making the other two girls envious.

Everyone thinks that Tupac's recent legal struggles, in which he is accused of sexually assaulting a woman, are unjust and the result of institutional racism. Tupac is guilty in many people's eyes just because he sings about the "gangster" lifestyle and because he has "THUG LIFE" tattooed on his stomach. One day, they hear that Tupac has been shot. Everyone is shocked and upset, and they listen closely to the radio for every small update as to his condition. Once recovered from the shooting, Tupac goes to jail.

Shortly after Tupac is released, D invites the narrator and Neeka to "roam" in the city. Fearful yet excited, the girls travel to the amphitheater of a city park, and on stage the narrator feels free and whole. It is a transformative experience.

Months pass, and the girls become teenagers. Gradually, D's story is revealed: abandoned by an alcoholic mother, she spent time in and out of foster homes and an orphanage before landing with the kindly Flo. One day, a teary D reveals that her real mother wants her back. Her mother is white, accounting for her mixed heritage. Despite abandonment, D loves her mother, and D compares her complicated relationship to her mother with Tupac's relationship with his own mother.

News comes in that Tupac is shot for a second time. After five or so days, he dies in the hospital. D is gone to live upstate, and her telephone just keeps ringing and ringing. She seems gone forever. But her memory will remain.

After Tupac and D Foster from BookRags. (c)2022 BookRags, Inc. All rights reserved.