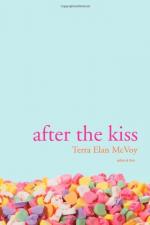 After the Kiss Summary & Study Guide

Terra Elan McVoy
This Study Guide consists of approximately 23 pages of chapter summaries, quotes, character analysis, themes, and more - everything you need to sharpen your knowledge of After the Kiss.

After the Kiss Summary & Study Guide includes comprehensive information and analysis to help you understand the book. This study guide contains the following sections:

This detailed literature summary also contains Topics for Discussion on After the Kiss by Terra Elan McVoy.

After the Kiss is a novel by Terra Elan McVoy. Written in verse, this novel tells two sides of one story. Camille is new in town and looking to find something or someone to help her forget the wonderful boyfriend she left behind in Chicago. Becca already has the perfect boyfriend, but having to take a job to pay for damage done to her car in an accident that was her fault puts a strain on the relationship. While Becca is working hard, her boyfriend goes to a party where he hits it off with Camille. Unaware that Alec has a girlfriend, Camille spends a week talking to him through email and text messages. This culminates with a kiss at a party that weekend. However, Alec disappears as quickly as he came into Camille's life, leaving her feeling lost. Becca, on the other hand, is devastated to learn of Alec's betrayal. After the Kiss is a novel that takes a look at both sides of the coin when a boy allows reality to cloud his judgment and he makes a mistake.

Camille has just moved to Atlanta, the third such move in the same number of years. Camille finds it more and more difficult to make these moves. This time she has left behind a boyfriend whom she discovers is not as easily replaced as her friends have sometimes proven to be. However, Camille is determined to adjust by throwing herself into new friendships.

Becca is a happy, well-adjusted young woman whose only unhappiness is the fact that her boyfriend goes to another school and they can only see one another for any length of time on Wednesdays and the weekend. This becomes a bigger issue when Becca is in a fender bender that was her fault, resulting in the need to get a job to pay her mother back for the damage done to the car. This results in less free time to spend with Alec.

Camille begins going to the lake, a house owned by a young college man who prefers the company of teenagers, causing him to open his house for parties each Saturday night. Here Camille meets Alec. Unaware that Alec has a girlfriend, Camille enters into a flirtation with him over the Internet. The following week when Alec shows up at the lake, he surprises Camille by giving her a kiss.

Unaware that the kiss was caught by cellphone camera, Alec is surprised when Becca confronts him about it. Becca ends their relationship on the advice of a co-worker and immediately regrets it. Becca's grief is compounded when Camille shows up at the coffee shop where she works. Becca's friend suggests that Becca befriend Camille so that she can win her trust and then destroy her with a dirty trick sometime down the road. For this reason, Becca is more than considerate each time Camille comes into the coffee shop.

Camille is devastated that Alec has cut off all contact with her. This devastation grows even more when Camille realizes the money she has been saving up for years so that she might go backpacking in Europe after graduation is nowhere near enough. Depressed, Camille calls her best friend in San Francisco. This girl comes for a quick visit and makes Camille see that her depression is rooted more in her grief over the ending of her relationship with the unnamed boy from Chicago than in Alec or even her desire to go to Europe after graduation.

Camille admits to herself that she misses the Chicago boy more than she realized and she decides to use her savings to go visit him. Becca, on the other hand, realizes she is better off without Alec and commits herself to going to a small, academically focused school in North Carolina.

More summaries and resources for teaching or studying After the Kiss.

After the Kiss from Gale. ©2005-2006 Thomson Gale, a part of the Thomson Corporation. All rights reserved.