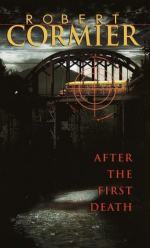 Robert Cormier
This Study Guide consists of approximately 24 pages of chapter summaries, quotes, character analysis, themes, and more - everything you need to sharpen your knowledge of After the First Death.

After the First Death Summary & Study Guide includes comprehensive information and analysis to help you understand the book. This study guide contains the following sections:

This detailed literature summary also contains Topics for Discussion and a Free Quiz on After the First Death by Robert Cormier.

After the First Death is a novel by award winning writer Robert Cormier. In this novel, Miro, a Middle Eastern teenager, and a small group of his fellow countrymen hijack a bus filled with five-year-old children on their way to summer day camp. These hijackers believe they are fighting for their homeland, a country they have never seen. Kate, the teenage bus driver, finds herself drawn into a drama with a bunch of kids she barely knows. Ben Marchand, another teen, finds himself drawn into the drama as well, destined to experience events that will color the rest of his life as well as his relationship with his own father. After the First Death is a complicated story that shows how violence changes and ruins all lives touched by it, even those who perpetrate it.

Ben Marchand sits in his room anticipating the visit of his father with much trepidation. Ben has not seen his father since the bus hijacking and worries about seeing his father with the knowledge of how he let him down that fateful day. Ben thinks of committing suicide, but hopes to seek forgiveness from his father first.

At the same time Ben tells his story, the reader learns about the events of the bus hijacking from Miro, the youngest member of the terrorist group. Miro had recently turned sixteen, at least by the birth date assigned him in the refugee camp, and his leader Artkin promises to treat him like a man during the hijacking. In fact, Miro is to kill the bus driver, his first act of manhood.

The driver is instructed to drive onto an old railroad bridge while Artkin feeds the children candy laced with a drug meant to keep them quiet. Unfortunately, with the accidental drug overdose of one of the small children on the bus, Miro is cheated of the murder he is to commit. Instead, Artkin orders the young female bus driver to help keep the children calm. The child's death provides Artkin with the threat he needs to use against the officials being notified of the hijacking at that very moment.

Once parked on the bridge, Miro is ordered to gain the bus driver's confidence and to encourage her to keep the children calm. The frightened girl is convinced the hijackers will eventually kill her because she has seen their faces. However, the girl, Kate, keeps her wits, even trying on several occasions to win Miro's confidence, or at least force him to see her as human so he would hesitate to kill her. When Miro tells her his story, and confesses to other crimes he and Artkin have committed, Kate is mortified by his monster-like behavior.

Kate finds a spare key to the bus in her wallet. Kate hides the key in her shoe until she finds the right moment to attempt to drive the bus off the bridge. Kate makes her attempt, but the bus stalls and she is forced to give up. Kate is more convinced than ever that she will die, but Artkin insists she must help with the children.

As the night comes, Miro learns that their leader, Sedeete, has been captured. Artkin demands an item from Sedeete's rooms to prove his capture. The military leader sends his own son, Ben, to deliver the item. When Ben arrives he is tortured and eventually gives up the time of a planned assault. However, the assault comes earlier than anticipated and Artkin is killed. Miro manages to escape with Kate. As they hide from their pursuers, Kate tells Miro that she thinks Artkin is his father. Miro kills Kate with the thought that she is attempting to deceive him. Miro escapes.

Ben Marchand learns in the hospital as he recovers from a bullet wound sustained during the assault on the bridge that his father had used him to mislead the hijackers. A short time later Ben dies in what the reader believes is a suicide. This death has driven the general, Ben's father, insane, leading to his status as a mental hospital patient.

More summaries and resources for teaching or studying After the First Death.

After the First Death from BookRags. (c)2022 BookRags, Inc. All rights reserved.