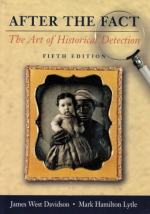 After the Fact: The Art of Historical Detection Quotes

"In effect, historians are seen as couriers between the past and the present. Like all good couriers, they are expected simply to deliver messages without adding to them. This everyday view of history is profoundly misleading" (Prologue, p. xiii).

"In adopting a perspective different from any held by the historical participants, we are employing one of the most basic tactics of sociology. Sociologists have long recognized that every society functions, in part, through structures and devices that remain unperceived by its members" (Chapter 1, p. 9).

"Paradoxically, the most obvious facet of Salem life that the historian must recreate is also the most insubstantial: what ministers of the period would have called the "invisible world." Demons, familiars and witches all shaped the world of seventeenth-century New England, just as they shaped the worlds of Britain and Europe" (Chapter 2, p. 35).

"The better historians are at their craft, the more likely they...

After the Fact: The Art of Historical Detection from BookRags. (c)2022 BookRags, Inc. All rights reserved.